What if I told you that ABC was going to try and cross promote one of its new TV specials during The Bachelor….would you believe me? This episode was almost too good to be true. I’m having extreme anxiety that I’m going to forget one of the asinine things these chicks said this week.

Fun Fuhrman Facts are taking an early break this week because I’m going to be spending Wednesday through Sunday with The Man himself. You’ll be getting a post dedicated to him during my trip to Phoenix for the Super Bowl. BUT keep sending in your summaries about why you or your friend should ride off down the Vegas strip with Todd to mattielouchandler@gmail.com and we’ll be in touch soon!

For some unknown reason the girls take from this date card that they won’t be wearing make-up. Why? This is where I hate this show — the unnecessary freak outs about something that has not been brought up, is not happening, and will not happen. If you couldn’t wear make-up, it would have stated NO MAKE-UP. Anyway, Ashley I. freaks out because everyone looks at her when Kaitlyn says no makeup and then throws Britt under the bus because she never takes her makeup off, which is disgusting and she could probably benefit greatly from a Clarisonic.

Chris picks these Trinas (you are not missed) up from the house, all with makeup on, in old school convertibles. I want to know how it was decided who didn’t get to ride in the car with Chris. Ashley I. wants to know how she lucked out getting to sit next to Chris in the car. You’re sitting next to him because you plopped your ass in that seat, Princess Jasmine.

They arrive at a lake, where Chris has yet to tell them they’ll be camping. While the lake is one of my favorite places, camping is like a -12 on my list of things I want to participate in.

Ashley I. says she is shy with Chris, which is one of the greatest moments of foreshadowing in Bachelor history.

Kelsey, who I just want to be happy but don’t think she belongs on this show, has turned judgy high school guidance counselor and doesn’t like that Kaitlyn took off her bathing suit bottoms and jumped in the lake. Fair. She then goes on to say that this date is full of bimbos, and while a valid statement, what did she honestly think she was getting herself into when she signed up? Commence pouting.

Back at the house, the girls are waiting around for Chris’s sisters to possibly show up and surprise, they do! They begin to have some Soules-to-Soules time with all of the girls who are still at the house, but first they go wake Jillian up from her drunken nap on the floats by the pool. Some highlights:

Carly: “Meeting his sisters is going to be such a big deal, because we could, like, be a part of their family.” Carly tells the sisters that guys have not been very nice to her in the past, and then she begins to cry. Naturally.

Jillian is worried that she is presenting herself the wrong way by being in a bikini when she meets them. This should honestly be the least of her concerns. She tells them she “has to make a move,” but she’s not sure what it is yet.

Whitney: My front runner. She nails it.

Britt: I’ve yet to figure out why this chick drives me nuts, but she does. It doesn’t help her cause that she waits until the camera is following her into the room to put her tank top back on over her sports bra. She also tells them that she feels like she’s the frontrunner. That never ends well.

Becca: SEC-SEC-SEC. She does well, not Whitney well, but well.

Jade: Our secret stripper. These girls are so good at appearing sweet and innocent when they meet the family for the first time. Is she going to tell them about her hooker heels and “testing out the bed” with Chris last week? No. She does tell them that she modeled for an internet clothing site. About that, google Jade Elizabeth. You’re welcome men at work.

Then a date card arrives and somehow the Jaded Stripper wins. How the hell does this happen? She’ll be going to a royal ball from 8pm- until the last stroke of midnight. Hello, new ABC Cinderella Special. How pissed do you think ABC marketing execs were when they found out the chick with the back tat would be playing Bachelor Cinderella?

Back to the group date where Kelsey is pouting about the quality of the lake, which she calls a hell hole, and then gets stung by a bee. Chris tells them they’re going to be camping there. HA.

Ashley I. says “I’m a camping virgin, and I’m also a virgin camping.” No girl who wears an American flag string bikini on a day other than the 4th of July is a virgin. At this point I’m thankful to The Bachelor producers for putting ChildMom Mackenzie and Ashley I. together to see if their high school educations can help them through tent assembly.

Kaitlyn says she is in her element while camping, and for the first time in the history of this show, I actually believe her. She and Chris clearly have a connection, and she gets the group date rose.

In case you’ve forgotten, America’s favorite Barner alum, Ashley S. is on this date, and she is ready to shine. She starts doing what can only be described as a rain dance around the campfire singing some unintelligible rhyme. Fantastic television. She has one-on-one time, and while there are subtitles, I have no clue what the girl is saying, and neither does Chris, so he gives her a peck and moves on. I continue to get emails from you all telling me this is how she was at Auburn.

ChildMom Mackenzie asks the girls if they believe in aliens, because this would be “the perfect place for them to abduct her and probe her.” Where the hell did they find this chick?

This week on things you didn’t see coming, Ashley I. sneaks into Chris’s tent to tell him that she’s a virgin and has never had a boyfriend. She’s worried she has been portrayed as something she’s not. Chris is all, “I don’t know what she’s saying right now.” This is why I love him.

One-on-one date with Jade. Time to get ready and cover up her back tat for the ball. Jade is given diamond earrings and Louboutins that she gets to keep. I suddenly feel like Loubs have lost their luster, along with Neil Lane, who has sent his stock spiraling since joining this show. She manages to pick one of the ugliest dresses brought in. Shocking.

It pains Ashley I. to see all of the princess things going on for this date because nobody in the house would appreciate this date more than her. Well, Princess Jasmine, go rub your belly button ring and use one of your remaining wishes, and see if it changes. Jillian chimes in with the best thing she’s said all season, “Ashley is going to cry.”

Let’s pause while ABC makes us watch a never before seen preview for Cinderella. Right, because none of us know how that story ends.

Jade and Chris have dinner with a casually placed glass slipper. She lets us know she was engaged before, but that she was 21 so it’s totally legit that it didn’t work out. Chris was also previously engaged, but they dated for 7 years. After dinner, there’s an orchestra for them to dance to. I’m going to go out on a limb and say this is Jade’s first run in with an ensemble of string instruments. She looks uncomfortable, like “when are they going to play music I can grind to?”

This date is reaching a new level of obnoxious, even for Bachelor standards.

Outside there are boxes with wedding dresses for each of them. “I don’t normally wear this,” says the single girl looking for love on a TV show.

“I like to hike, and run, and do outdoorsy things, not be all girly, so I’m not feeling like the best Jillian today.” They board a private jet and land in San Francisco, where they end up at a mud-filled obstacle course. Jillian wins, because DUH. She gets a one-on-one date, and Chris seems understandably annoyed. Again, glad to see Crossfit actually prepares you people for something.

Cruise Ship Carly asks the question everyone is thinking, “Is Jillian’s ding-dong bigger than Chris’s?” Honestly, probably a tossup. I’ll work on getting some odds on this from Todd Fuhrman. 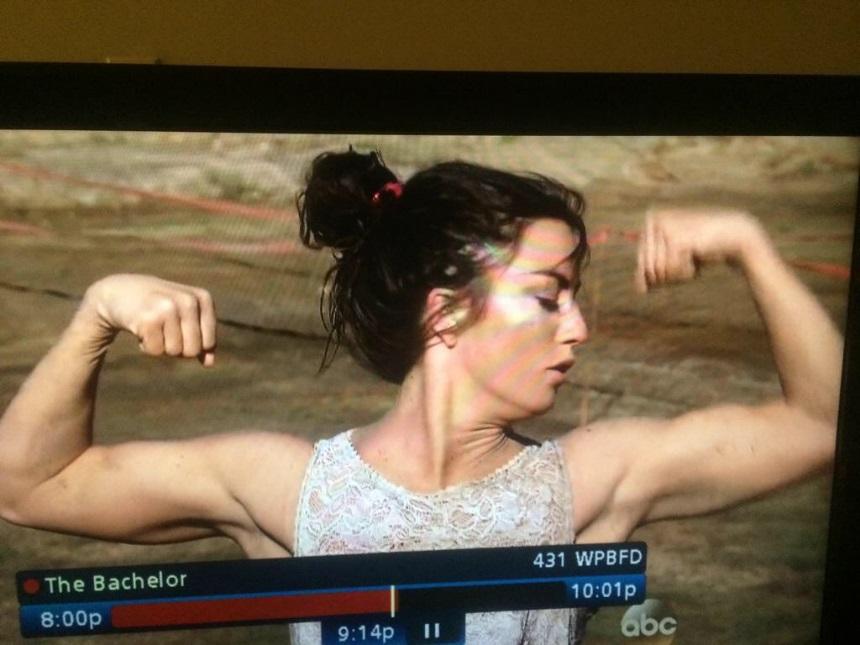 One-on-one date with Jillian. At dinner Jillian cannot stop talking. Chris asks what her 5 year plan is, and she rambles about how she got into working out. Then she attempts a game of “who would you rather.” This is not a game that is made for TV. Jillian is also not good at it: “Would you rather have sex with a homeless girl, or…” It doesn’t even matter what comes after that. Sadly, Jillian and her black censored box are not coming back to the house….Chris cuts her before the end of the date.

Rose Ceremony aka Prom Dress Parade:  Ashley I. is concerned that she did not clarify to Chris that she is a virgin. THERE IS NOTHING TO CLARIFY. She tells Chris, and follows it up with, “I mean don’t get freaked out about it. It’s not something I’m super serious about. I’m just like waiting for the right person.”

She then decides she needs to tell all of the girls that she’s a virgin, ya know, in case they missed the memo. Carly says what we’ve all been thinking, “I’m shocked she’s a virgin, I mean her mouth is clearly not a virgin.” Cruise Ship Carly is in the Clubhouse with a 2 stroke lead this week.

Becca then reminds me why I have her as a front runner and calmly tells Ashley I. at this meeting of everyone that she’s a virgin too. The difference here is that I actually believe her.

Britt uses her time with Chris to throw other girls under the bus. Apparently she has never seen this show, because this never ends well. EVER.

See ya, never: America’s favorite Barner Ashley S., Nikki (who are you?), and Juelia… I’m not even going there.

Your drinking word for next week is virgin, since Ashley I. managed to stay in the game. I’ll be live tweeting per usual @MattieLouOKTC