Football’s over for another year, but what an ending.

Let’s roll with the ten best moments from the night.

1. Pete Carroll’s decision to throw the football on second down.

Let’s be clear, this is the worst play calling decision in Super Bowl history. You have Beast Mode in the backfield and the last time he got stopped when he needed a half yard was a Pop Warner game in 1994.

YOU GIVE HIM THE FOOTBALL.

This why I argue that every team needs an assistant coach of common sense. Because the intent here was not complicated. It just overthought the situation. The Seahawks wanted to throw on second down because they only had one timeout left. The thinking was that most likely they either scored or threw an incompletion. (An interception was, not surprisingly, the worst possible result and probably considered unlikely given how well Russell Wilson typically plays in scoring situations such as these). If you throw an incompletion, the clock stops. Then you have one timeout left and you have preserved your run/pass option for third and fourth down.

If you run it on second down and get stopped then you have to call a timeout and you probably have to throw on third down. Because if you run it again and don’t get it in the game is over. So this way you’re thinking you’re catching the Patriots with a pass when they suspect a run and then leaving open the run/pass option on third and fourth down if necessary.

All of that makes sense until you consider one fact.

YOU HAVE BEAST MODE.

This is just the perfect example of coaches overthinking situations. It’s why a coach needs an assistant coach of common sense.

It also takes Bill Belichick off the hook here too, why didn’t he take his own timeouts to leave Tom Brady some time in the event the Seahawks score? Weren’t there lots of Patriots fans screaming this? There was one minute and six seconds left when Lynch took the hand off and bulldozed to the one. Belichick had a chance to call a timeout here and preserve a decent amount of time for Brady. He let the clock keep running all the way down to 26 seconds, which was when the Seahawks threw their interception. If the Seahawks score on that play, he’d be getting ripped for not calling timeout. All of these last minute football coaching decisions are just fascinating to me.

If you’re a Georgia fan, by the way, this is definitely how the title game will end if you ever get there. Just prepare yourselves.

It’s also the perfect ending to my football gambling season. Of course I had the Seahawks. The single play swung hundreds of millions — maybe billions? — of dollars in wagers.

2. This photograph of Tom Brady and Richard Sherman.

It’s up above as our primary image.

Brady stood up and shook Sherman’s hand shortly after this was snapped, but this is the iconic image of the game. Especially after Sherman’s, “You mad bro,” routine the last time these two teams played.

And, as much as it pains me to say it, Tom Brady is now the greatest quarterback in NFL history. It’s hard to argue for Peyton Manning now. I think Brady is one and Manning is two.

Imagine how rough of a time the Nationwide creative team is having today. No way any of these guys and girls slept last night.

Somehow they decided that the best way to sell their product was to do a commercial about a kid dying. While millions of American families are sitting down to enjoy the Super Bowl with their young children. I already thought that Jurassic Park movie commercial was going to give my four year old nightmares and then you kill off a kid.

I’d love to know the story of how no one thought this might have missed the mark. Did they show this to anyone outside the company? Did no one inside the company think — maybe we shouldn’t kill a kid in a Super Bowl commercial?As one of you Tweeted me last night, this would have been like having the puppy get trampled by the horses just as he made it back home.

4. This response to the Nationwide Commercial.

I love Katy Perry because she’s so over the top as an entertainer. She came out riding an animatronic tiger and I wasn’t surprised. Then she had beach balls with mouths and dancing sharks. Again, no surprise.

My four and seven year old boys watched this Super Bowl with me — at least part of it anyway — and enjoyed this show. I can’t imagine anyone not liking it. Hell, even Twitter liked it and Twitter hates everything.

When she finished her performance all I could think to Tweet was, “America, fuck yeah!”

Seriously, it was the most American performance possible in all respects.

7. Doug Baldwin taking a dump with the football as a prop.

And NBC having to cut away from the dump part.

Because otherwise this would be a huge story.

As is, hardly anyone realized what happened. Most thought he’d just pulled a Randy Moss and pretended to moon the crowd.

Can you imagine the nationwide reaction if over one hundred million people had seen a simulated dump with the football as the poop? My boys would have thought this was the greatest thing in the history of the world. But he would have gotten killed for doing it.

What’s the fall out for Baldwin?

Does he get an endorsement deal with a stool softener or a fiber company? He has to, right?

The fall out would have been incredible.

I also love that an NBC programmer had to make a real-time decision about whether to show a simulated dump during a football game. You can’t prepare for that, it’s just instincts, baby.

8. Chris Matthews for the Seahawks and Malcolm Butler for the Patriots coming out of nowhere in this game.

This is partly, I believe, why football has become America’s favorite sport. Sure, you have the Tom Brady’s and the Russell Wilson’s, the superstars out there who drive almost all the coverage, but most of us will not ever be superstars.

You also have regular guys who can win a game.

Guys who are so anonymous that 99% of football fans can’t even name them can be integral in winning the biggest game of all. It’s outstanding.

Despite all its flaws, like all of you reading this right now, I just love the sport.

I set the over/under on drinks consumed at 31 and several of you Tweeted that you’d pay to have a Gronk cam follow him for the rest of his night. Can you imgaine how insane it was?

I don’t know if any pictures will ever leak out, but this was the kind of night that you give up years of your life to experience just once.

This was the perfect ending to this year’s NFL season. A superb game — one of the best, if not the best, in Super Bowl history — ends with a brawl. Football, you’re not public, but we do love you.

Hope springs eternal that next year your team might be in the Super Bowl.

Even if, like me, your team is the Tennessee Titans and presently has the worst odds in the NFL, at 300-1, to win a Super Bowl. 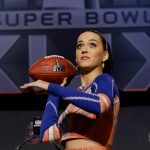 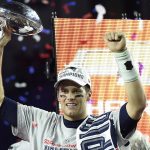