Texas got a big win over West Virginia on Saturday. It moved the Longhorns to 4-2 on the season and still in contention for a Big 12 title. But the performance from both teams did not look like a typical Big 12 game.

The final score was 17-13 in favor of Texas. The total yardage output combined was 723 yards. So, 30 total points and 723 yards. We’ve seen Big 12 games where one team exceeded both of those numbers. In fact, it doesn’t come as a shock to anyone when a Big 12 team puts up 30 points in a half.

It was a sloppy game for both teams, which is why there were low totals for both offenses. But Texas was able to get the victory, and to them, that is all that matters.

The Longhorns are now on a three-game win streak after dropping back-to-back games against TCU and Oklahoma. Will that be enough to help get them back into the conversation for a Big 12 title? That remains to be seen, but it is definitely a step in the right direction.

One thing we did learn is that freshman running back Bijan Robinson might be the top option in the Texas backfield moving forward. He only got 12 carries against the Mountaineers, but he turned those limited opportunities into 113 yards. He also added two catches for 38 yards.

With an open week and then Kansas coming up in the next two weeks, there is plenty of time for Texas to get some issues fixed before taking on Iowa State on Nov. 27. 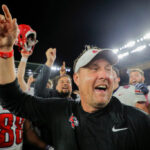 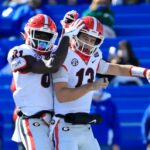