You know that feeling you get before a game where it just feels as if something crazy could happen? This Texas A&M and Auburn game presented that weird knot in my stomach, even as I picked the Aggie upset on Thursday. Something about this game was going to be off, and it turned out to be the Auburn offense. Texas A&M put on a gutsy performance and defeated Auburn, the No. 1 overall seed in the SEC Tournament, 67-62.

This turned out to be one of the wildest wins in the country.

The first twenty minutes were the worst Auburn had played all season. The Tigers shot 16% from the field and just 3-20 from behind the arc. Every time K.D. Johnson came down the court, he showed a look of disgust.

Meanwhile, the Aggies pep band seemed to love it. They were the loudest group of Texas A&M fans in the house. The constant chirping towards Auburn players, along with their own chants, made life miserable for any Auburn fan sitting close to them.

Might not be a bunch of Aggie fans here, but the pep band is doing the job. pic.twitter.com/VpKLf6pY7t

The Aggies on the court did too. At the 10:52 mark, the Aggies led 53-33, and they just seemed to want it more. Almost every time Auburn scored on one end, A&M would score on the other. Walker Kessler of Auburn struggled down low because he kept bringing the ball down, and the guards looked out of sync all game.

Auburn fans controlled the building, and it wasn’t close. There might have been 200 Aggie fans in the building today, most of them behind the bench. But that didn’t matter. A&M head coach Buzz Williams ran down the sideline several times, making it look like he hit a few Red Bulls before the game. 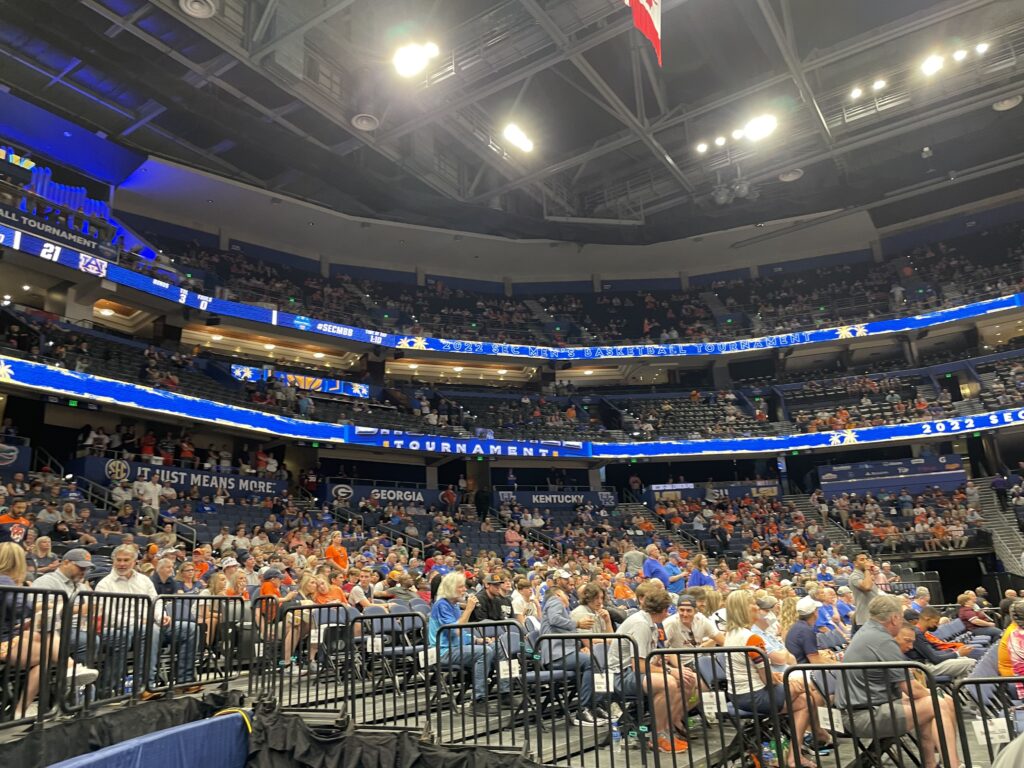 I watched Texas A&M AD Ross Bjork all game. When he wasn’t nervously shaking his head, he was pounding the table, anxiously hoping his team would hold on. He complained to the officials about a shot clock violation during a commercial break, knowing every basket counted in this game. He was right to worry, at least for a while.

Auburn started their furious comeback at the 6:48 mark of the second half, down 56-44, and the Texas A&M section prayed they could hold off the charge. The band members weren’t as loud and talkative as before, though almost every fan in the building rose to their feet. The Tigers had cut the lead to ten points, while Buzz Williams unwrapped another cough drop on the sideline, trying to make his voice last to the end.

At the 5:14 mark, the Aggies hit another basket, while the Auburn fans behind me yelled that the referee “sucked” for at least the 50th time this afternoon. The fans clad in orange then busted into a gigantic roar as Wendell Green Jr. drained a 3-point shot. The near-capacity crowd wasn’t about to sit down now, not with the Tigers giving fans hope and the Aggies looking to finish the job.

Then comes that nervous energy. The Auburn fans were singing the fight song. Probably a lot of them thinking, “They better win this damn game because I didn’t pay this much money to go home early.” Something like that, but probably with more profanity.

Then Wendell Green Jr. of the Tigers drained a shot from the logo, narrowing the gap to five with 1:56 remaining. At this moment, I thought the game would be over for the Aggies, but then Quenton Jackson came right back with a dunk that would’ve made LeBron James proud.

That nervous slapping of the hands from Auburn fans was brought to a rest by Quenton Jackson again, as he went soaring through the air to block a Zep Jasper layup. Were we about to witness one of the biggest upsets in SEC play this season?

Yes, yes we were.

Quenton Jackson finished the game with 17 points, while Henry Coleman had 16 and Tyrece Radford topped it off with 19 of his own.

The face that Auburn assistant coach Steven Pearl made when one of his players was called for a foul summed up the game for the Tigers: equal parts desperation and disbelief.

The Tigers were presented the SEC regular season trophy before the game began, but that’s the only trophy they’ll be taking home from Tampa.