If you would’ve told me that the Tennessee offense would come bursting out of today’s game, in the same fashion as last week, I would’ve called it wishful thinking. But on Saturday, we again witnessed the Vols offense come storming out of the gates.

Tennessee defeated the Gamecocks 45-20, on a day where they also honored former linebacker Al Wilson.

The Vols were looking to build off last week’s performance against Missouri, where they scored 28 points in the first quarter, which set the tone for the entire game. So, as the Gamecocks came rolling into town on Saturday, Tennessee was waiting for the opportunity to showcase the offense again. It didn’t take them long to figure out how to beat the Gamecocks, as Hendon Hooker connected with Jalin Hyatt for a 3-yard TD pass, capping off a 66 yard drive and setting the tone. 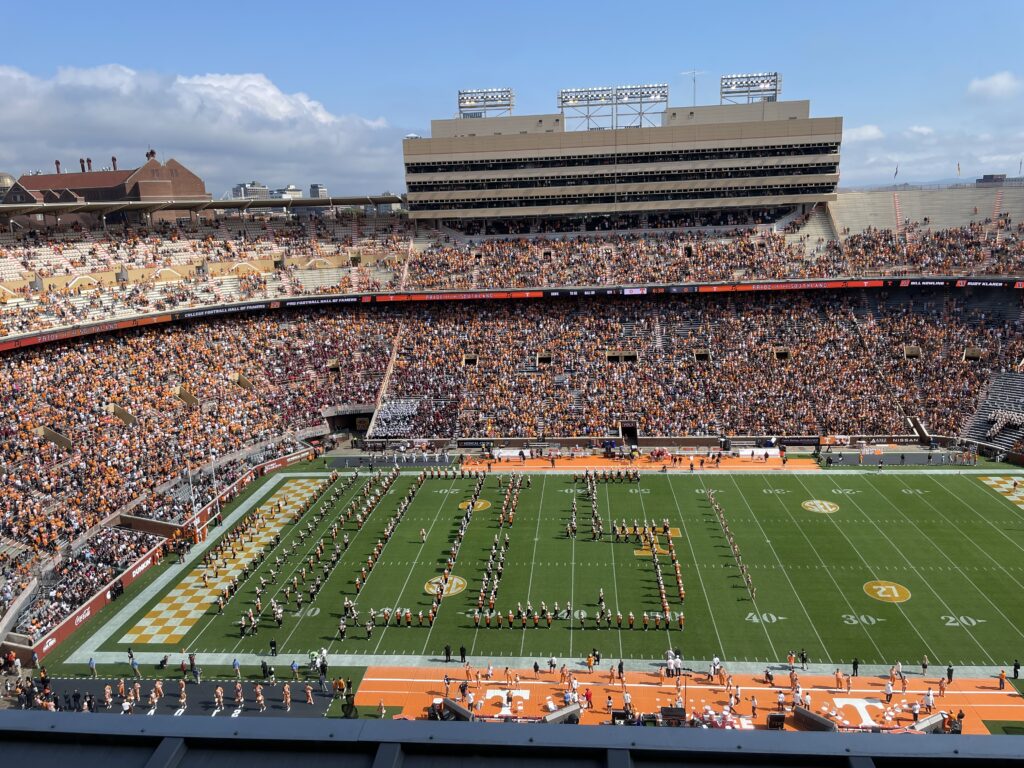 With 7:12 on the clock, the Vols quickly made life even worse for the Gamecocks. Hendon Hooker directed his team down the field in three plays, setting them up for a 39-yard touchdown to Javonta Payton. A perfect fake from Hooker, led to Payton being wide open down the field for the 39-yard TD. The Vols had come out firing on offense, again, which was a welcomed sign to the 82,000 fans in attendance.

Josh Heupel spoke about Hooker’s command with the offense, especially being able to trust him with the ball in his hands.

“Hendon’s continuing to grow and develop offensively. To have complete command of what we’re doing. That’s in the run game, that’s in the pass game, it’s understanding protections. You can see that we trust the ball in his hands in certain situations too and continues to grow and take great care of the football. He has great command and the players have responded to him in a really positive way.” 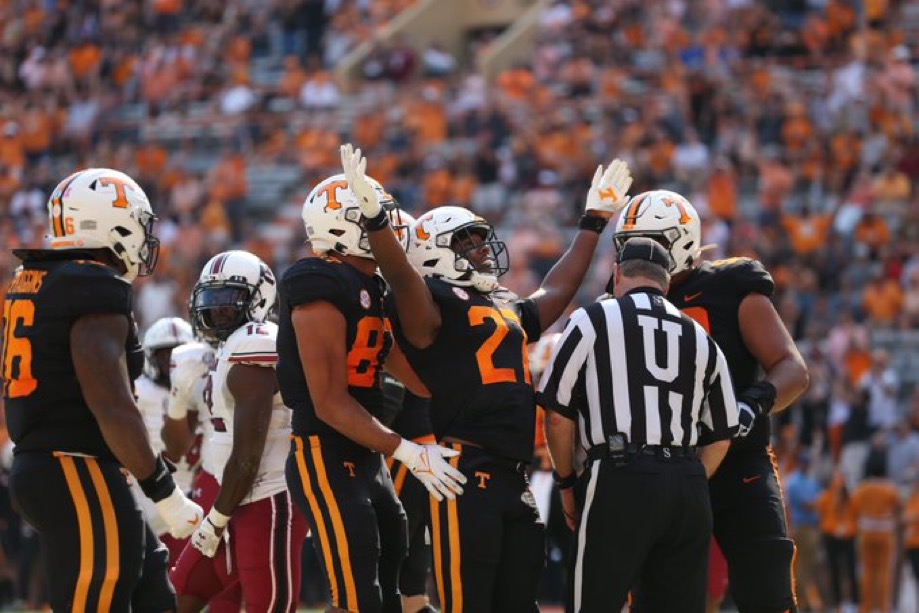 The South Carolina defense allowed Tennessee to score three more times in the first quarter. Hooker scrambled for an 11-yard TD, Velus Jones Jr. took it in from 21 yards out and Tiyon Evans capped it off with a 45-yard run to the checkerboards. In all, Tennessee had scored 28 points in the 1st quarter and 38 total points in the 1st half. The Vols had scored on 6 of 7 first half drives, leading to the 38-7 halftime lead.

The Vols had amassed 373 total yards in the first half, including Hendon Hooker going 15-20 for 217 yards and 3 TD’s. Also, Velus Jones Jr. had 5 receptions for 104 yards and 1 TD, leading the Vols in receiving. The Vols rushing attack, which had 156 total yards in the 1st half, thanks to Tiyon Evans and his 45-yard TD run in the 2nd quarter. The Vols had this game in control and South Carolina would be playing from behind all game.

Let’s not forget that Tennessee was playing shorthanded at a number of positions today, including the secondary.

On the defensive side, Jaylen McCollough picked up his third interception in four games, leading the Vols secondary. Tennessee’s defense held Luke Dotty to 19-31 for 167 yards and 0 TD’s. The Vols were also led by first-time starter, Brandon Turnage, who finished with 14 tackles, 7 of them solo. Heupel praised the effort of Turnage postgame, also mentioning that he didn’t find out he’d be starting until late in the week.

“You mentioned Brandon Turnage, the guy played, I’m not going to say flawless because I haven’t watched the tape yet, but he played rock solid. It was a great effort by him.”

Then came the 2nd half, where the Vols offense looked out of sync, while the defense gave up 14 points, with 10:02 remaining. This was not what Josh Heupel was looking for out of this group, especially not scoring a TD since the 5:40 mark of the second quarter. 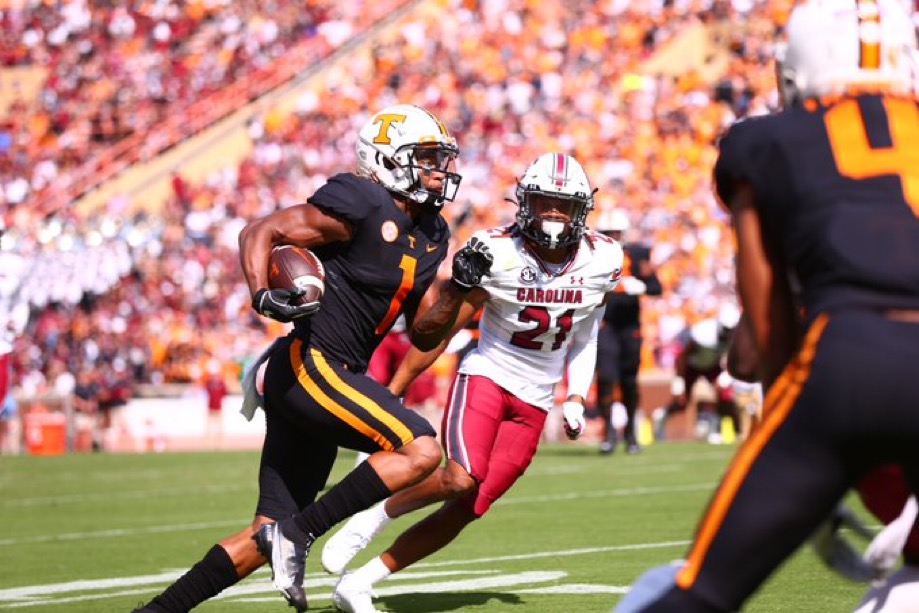 The Gamecocks added two touchdowns in the second half, thanks to a fake punt touchdown pass and a 1-yard TD run. I understand the frustration from Tennessee fans in the 2nd half, especially getting held off the board, but keeping the Gamecocks at arms length was the goal, while they worked on a few things. To be honest, I think the Vols defense played well in the 2nd half, giving up only one offensive touchdown and getting caught off-guard on special teams. It happens, and the Vols made sure the Gamecocks didn’t get on the board again.

So much is made of the explosion factor of this group on offense, but for most of the second half, this team was working on the clock. Hendon Hooker finished the day 17-23 for 225 yards and 3 TD’s, while also rushing for 66 yards and 1 TD. A solid day for the Vols starting quarterback. Tiyon Evans finished the game with 119 yards on 16 attempts, with 1 TD.

In the most surprising move of the day, the Vols went under center on 3rd down in the 4th quarter, at the Gamecocks 3-yard line. As the shocked faces looked on, Tennessee’s Len’Neth Whitehead ran it in for the first touchdown since the 5:40 mark of the 2nd quarter. This touchdown put a stamp on the well earned victory for the Vols, who are now 2-1 in the SEC.

Overall, you have to like what Josh Heupel is doing with this Tennessee football team. On offense, they looked proficient, and on defense, they looked sharp for most of the game. As for Tennessee fans, well your team is 4-2 now, with Lane Kiffin and Ole Miss coming to town next Saturday. The efficiency you saw out of this team for a good chunk of the game, will only dar more enthusiasm for this team.

Heupel was asked about where he thinks this team is, halfway through the season.

“We were good enough to win today. At the end of the day, that’s all I’m thinking about and that’s what our players need to be thinking about too. When you walk off the football field, you’re either good enough or not on that given day. It’s a hard and tough game, with great players and coaches on both sides being highly competitive. I’m pleased with the effort today. It’s a bunch of one-week seasons, and I think our guys will flip the script on Monday and be ready to have a great week of preparation for Ole Miss.”

Right now, they are scoring points at will and the defense has played far better than anyone would’ve thought, just four weeks ago. this was another solid day for Tennessee, as they look to prepare for a wild week in Knoxville.

The Vols offense continues to roll, with a shootout just a week away.