Knoxville — After the 2021 season concluded for Tennessee football, the university started working on renovating the famed Neyland Stadium. Two days after Tennessee defeated Vanderbilt, construction crews were already inside the stadium, setting up for a job expected to finish by September, ahead of Tennessee’s season opener against Ball State.

The renovations include an all-new lower west sideline section featuring chair-back seats and a field-level club area that will include restrooms, new food stations and a bar. The sections of the stadium where these new seats will be located have already been taken out, with the construction crew working with cranes and bulldozers. 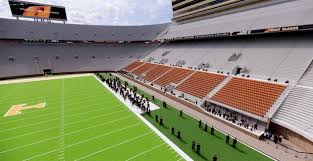 Another area that is getting a fresh look is the north-end upper deck. Tennessee decided to build a standing-room-only deck that features a patio-like atmosphere, where folks can stand and watch the game along the outside railing. This will also feature a bar area and food spots for fans to enjoy and look out over the field from above.

In the north end zone, Tennessee is also installing a brand new sideboard, which will hang over the new party deck that is being built.

The new upgrades are part of construction plans that have been a long time coming, ever since the school announced renovation plans years ago.

The school has announced other renovations for the stadium, but phase one is currently underway.

Neyland Stadium will have a fresh look once the 2022 season arrives.