KNOXVILLE, TN — The Road to Omaha makes one more stop in Knoxville for both Tennessee and Notre Dame this weekend, as the Super Regionals get underway. This is it, lose 2 out of 3 and your season is over, so the stakes were already high for the upcoming matchup. Now add on the pressure of playing for a spot in the College World Series and it takes the stress level up a notch.

How we got to this point is in the rear-view mirror, nothing else matters besides what happens on the field starting tonight at 6 PM ET on ESPN2. The Fighting Irish arrived in Knoxville coming off a regional win at Georgia Southern, whom some had pegged to play Tennessee this weekend. But everything shifted once the Irish got out of Georgia and the Vols took care of business last weekend at Lindsey Nelson Stadium.

So, the Vols are running it back, in the same spot they were in last season, hosting a Super Regional for an appearance in Omaha. A lot has changed from last year’s team, but the way in which this squad plays the game hasn’t. We’ve all seen the videos floating around on social media of how the Vols have played the game this season, so there’s no reason to rehash that. Either you like them or you hate them, there is no in-between with this squad.

But, Tennessee is getting their first look at Notre Dame, though the Irish are familiar with SEC territory, having played at Mississippi State last season. Vols head coach Tony Vitello will be trying to prepare his squad for a team that is deep at the pitcher spot, especially coming out of the pen. There’s also the starting pitcher, Austin Temple, who is usually not their Friday night ace, whom Notre Dame coach Link Jarrett decided to start in place of All-ACC pitcher John Michael Bertrand because of his pitch count last weekend. The Irish are saving him for Game Two. Tony Vitello was asked what stands out about this Irish team, he pointed to the pitching depth.

“I mean it’s really deep, obviously. We are assured two games, but we’ll just worry about Friday now with Temple, likes to spin it but his fastball isn’t light either, kinda your typical deal in either our conference or those you’re gonna see on a Friday night.

“We talk about depth around here, because you guys bring it up, we feel confident in a variety of guys off the bench,” Vitello added. “I think in particular pitching is an up and down thing for them, they’ll rely on guys in a bunch of different settings or roles. You can look at the save numbers and see that they trust a lot of guys that are capable of doing different things for them.” 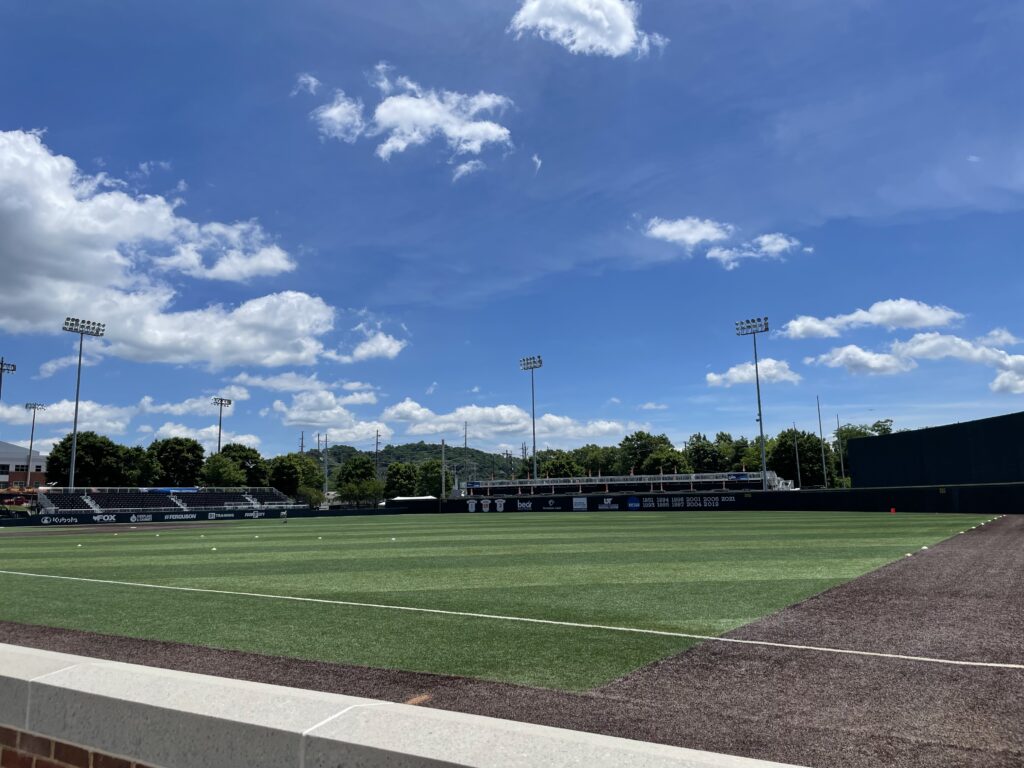 The Vols are staying in rhythm dating back to the SEC Tournament, going with Blade Tidwell on Friday night and Chase Dollander on Saturday. You have to get past the first two games and if this Tennessee squad should have to come up with a plan for Sunday, they’ll have options.

But what this game could truly come down to is how each team keeps its composure. Playing at home for a Super Regional is a blessing, which Tony Vitello is not taking for granted. He knows how big it is to play in front of a hostile crowd at Lindsey Nelson Stadium, which he admits his team feeds off of and can’t be understated.

“No it can’t because you work all year long and you want that, you sit at home and there are certain teams that can make the argument that you want to host, it’s a competitive thing. Everybody is hunting it down for a reason because it can help you. I don’t know if this time of year that sleeping in your bed is gonna matter for a game of this magnitude and competitions are this high, with both teams this talented.

“The thing for us is just our fans. It’s awesome being in Hoover, it was awesome being in Chattanooga or Memphis, twice in Smokies park and it was incredible,” Vitello added about playing elsewhere. “Trust me, we appreciate that, I think it helps our guys’ efforts, but there’s a little bit different way it goes down for our players when it’s a home crowd. I think it’s a little bit more of a comfort zone and it’s something that helps our play.”

Yes, the Irish can hit, but how they handle themselves in a raucous environment on Friday night will set the tone for the the series. Link Jarrett has seen bigger stadiums around college baseball, but the crowd his team is walking into this weekend isn’t lost on him.

“It’s not as big as Mississippi State, but man-for-man, this is the loudest place you’re gonna play. Like, they’re into it and the team feeds off of it. They’ve got a special thing dialed in.”

Either way, Knoxville will be one of the premier spots for College Baseball this weekend and I have to think a lot of eyes will be tuned in to see if the Irish can quiet this Vols lineup. One thing is for certain, this will be a series you don’t want to miss, whether you like either team or not.

Link Jarrett was asked what it would mean to get Notre Dame back to the College World Series for just the third time in program history.

The Irish have a very tall task in front of them if they plan on extending their season beyond Sunday and the Vols have had a goal of getting back to the dance since the off-season they stopped consecutive games in 2021.

Game on, it’s time to decide who’s headed to Omaha.