INDIANAPOLIS — We have talked about this situation a million times over the last number of years when it comes to Tennessee basketball. When are the Vols going to capitalize on the talent that is on the roster?

This question was a hard-hitter when I would talk to folks around the SEC and every Tennessee fan that would blow up my mentions. I would even discuss this over the last few weeks with my good friends on a weekly radio hit.

Now the question becomes even harder to answer, because I have no idea.

This team wasn’t overhyped, the way this team performed over the last two months of the season gave fans hope a run was possible. But the offensive woes that we witnessed at times, with the scoring droughts, finally caught up to them after them finding ways to get around them for most of the season.

College basketball is a cruel game, it’s not for the weak-minded, it can bring you to your knees and make you hate the game after an unsettling loss.

The worst part about losing in the NCAA Tournament is knowing you have enough talent to go further and not knowing what the future holds for the current alignment. This feels like the case for Tennessee, who were upset on Saturday night by a gritty Michigan team, coached by Juwan Howard. 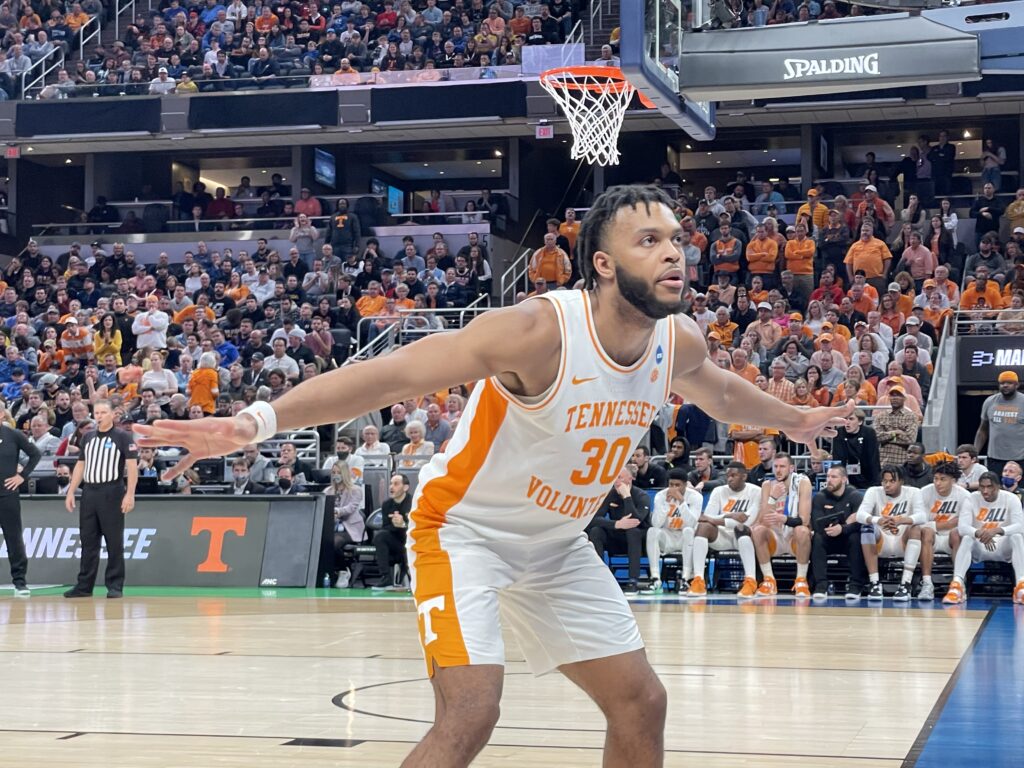 I could go on for days about how this team failed to live up to expectations, especially with a generational type point guard like Kennedy Chandler trying to will you to a victory. But you all know the story and watched how it unfolded this season. There were times during the second half of the season that I thought this team could make a long run in March, definitely coming off the stellar performance in Tampa to win the SEC Tournament. But maybe there was a bit of doubt always hanging around the team, not because of effort, but because of trends we’ve noticed throughout the year.

The shooting drought reared its ugly head again on Saturday evening, with the Vols going over five minutes without a field goal at one point. This isn’t anything new, seeing this type of scenario dozens of times this season. But most of the time this team found a way to put that in the rear-view mirror and grab an impressive win. not this time though. There have been times during the season where Rick Barnes and his staff would find the right answers to get them through a tough stretch or out of a small hole, but there wasn’t much digging that could be done when you shoot 11 percent from the perimeter. 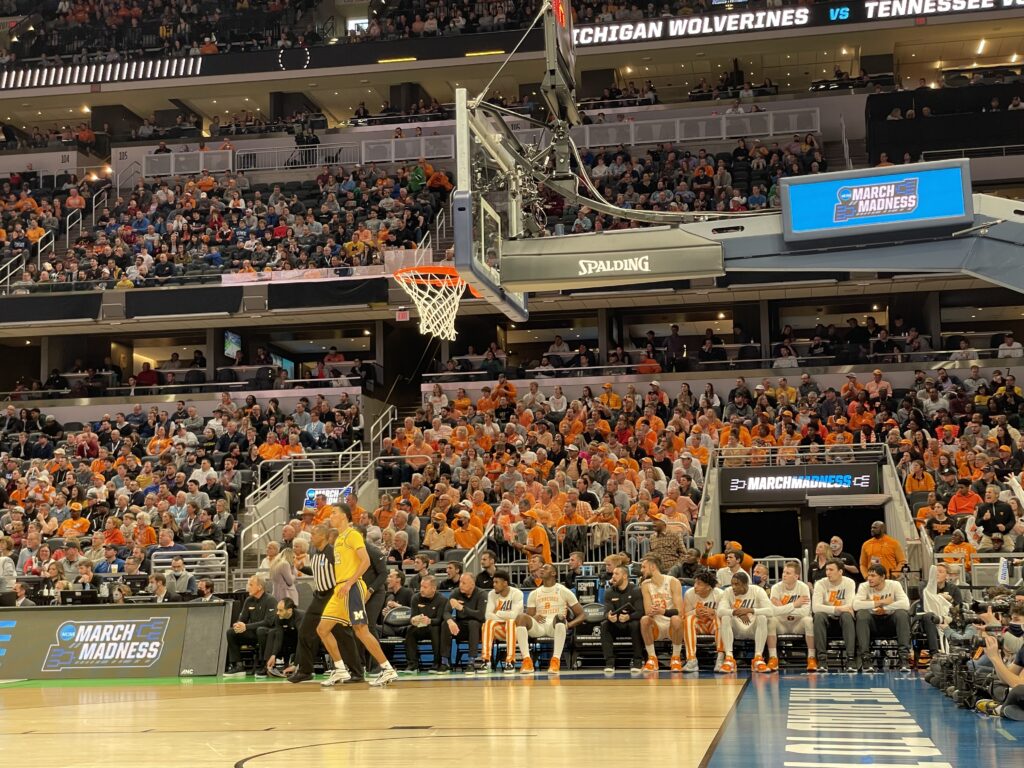 When the Wolverines went to a zone defense, there were times where you thought the Vols could drive them back to a man-to-man defense, but it still didn’t effect much of the game plan. Rick Barnes was happy to see them switch it up on defense, knowing they’d have success driving the basket.

“You know, I don’t know they controlled the tempo,” Barnes said. “They got tired. We knew it, and we kept trying to push the tempo. Like someone asked about a zone, we were glad when they went zone because we knew they weren’t going to stay in it. That was not a factor. We knew if we drove it a couple times, they would switch man to man. What we weren’t able to do was take advantage of it early inside because sometimes you end up with mismatches there.”

The other harsh reality of where this team was offensively all evening was how many good looks they were getting from outside the arc. I was right there in the second half, watching Josiah-Jordan James, Santiago Vescovi and Zakai Zeigler put up shot attempts from the corner, but they just weren’t falling. Call it bad luck or settling for shots, it doesn’t matter. Kennedy Chandler was smoking Michigan defenders through the lane, somehow getting around Hunter Dickinson numerous times, on his way to a 19-point game. But it wasn’t enough, not in this type of offense. Usually when Josiah-Jordan James and Chandler are getting in the double-digit point area, the Vols are coming out on top, but they couldn’t counter the shots tonight from Michigan.

There is one area of tonight’s game plan that stood out to me like a sore thumb and it revolved around the paint production. We all witnessed Brandon Huntley-Hatfield and Uros Plavsic start the second half with eight points combined in the first three minutes, getting nice looks from five feet. But then this team decided to start settling for the outside shots that they were praying would start falling. You can chalk it up to the Michigan defense or the way Tennessee was trying to attack the basket, scoring six points in the final four minutes, all around the rim, but missing six shots in the final 3:41.

Tennessee never looked comfortable the entire evening on offense, with Kennedy Chandler getting to the basket being the only answer.

So, we get back to where this program goes from here and the expectations moving forward. They unfortunately left at least an Elite 8-type of tournament on the court in Indianapolis tonight. The talent was there, the momentum leading up to the matchup was there and they almost had everything they needed to do it. Not having a bigger post presence hurt this team, obviously. Having watched teams like Auburn and Kentucky find success during the season with a true big man, while running a tempo offense, should be something this program strives for going forward. Players like Jonas Aidoo and Brandon Huntley-Hatfield have a nice looking future ahead, but it would’ve been nice for this team if they were able to contribute a bit more.

Now comes the hard question, which is “What’s Next?” for the program. You will lose Kennedy Chandler most likely, the sixth-year senior John Fulkerson is done. (He was so much fun to cover.) Also, who decides to look for more playing time somewhere else? These are the roster questions, the addition of BJ Edwards will help Zakai Zeigler next season and you pray that Josiah-Jordan James comes back.

As a program, a second-round exit from the tournament is not meeting expectations, period. Having the access to this type of talent at the guard position and even at the four with James, is something that doesn’t deserve to be wasted. Rick Barnes will also be replacing assistant coach Mike Schwartz over the next week or so. Sitting here looking at the Tennessee basketball program, right after a season-ending loss, there are a bunch of areas this team will have to improve at as a group moving forward. But, there will be talent and that’s a positive moving forward, as much as it stings right now to lose.

But I am also tired of hearing this team has the juice to make a long run in the Tournament, for it to only run off the tracks in the same city as last season. I don’t know what the answer is and I won’t act like I do, but winning the SEC Tournament will only go so far with the fan base, if you aren’t getting out of the first weekend of the NCAA Tournament.

Now we go through another offseason wondering “What If and What’s Next” for Tennessee. Having to answer those questions the past number of years has got to be getting old.

But, we’ll be here waiting to see what Barnes can do next season, just like we were around this time last year in Indianapolis.