One of the biggest events on the wrestling calendar took place in Tampa on Sunday evening. World Wrestling Entertainment presented their 34th annual “Royal Rumble,” which officially starts the season wrestling fans like to refer to as “the road to WrestleMania.”

The show was highlighted by six matches, including a pair of rumbles (one men’s and one women’s) where the winners earned a shot at a championship at WrestleMania 37, which takes place April 10th and 11th at Raymond James Stadium in Tampa.

While there were some surprises in both rumbles, they mostly went off as planned, as did the rest of the card.

Here are some thoughts and takeaways on each of the matches as well as a little look ahead as the WWE begins to heat things up for WrestleMania.

The storyline between Charlotte Flair and her dad and ‘Southern Belle’ Lacey Evans is already in motion, so I thought this match would be all about the outside interference. Would it be enough to cost Flair and Asuka the belts?

Overall, it was a solid pre-show lid-lifter to get the crowd ready, and the four ladies worked hard and had good chemistry.

At this point, I wouldn’t expect to see Asuka and Flair team up much anymore. The two are so much better as singles.

Expect to see Jax and Baszler wrestle at Mania, likely in a pre-show match against the likes of, say, Dana Brooke and Mandy Rose. 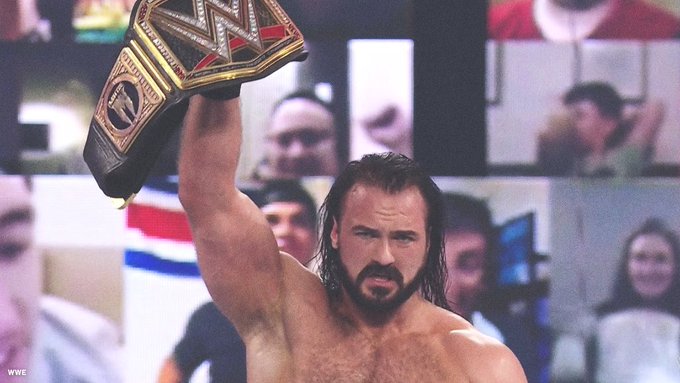 A match that could have been a train wreck was actually not all that bad, mostly thanks to McIntyre’s star status and his ability to carry the 54-year-old Goldberg to a passable match.

There was a number of pre-match antics with Goldberg putting McIntyre through the barricade, and there were a lot of high profile moves. Goldberg hit a number of spears, including the jackhammer, which is typically his finisher, but McIntyre kicked out of it.

McIntyre finally finished off Goldberg with his claymore kick to get the three-count, and that should be the last we see of the former Atlanta Falcon in a main event role anytime soon.

Give credit to both guys. This really could have been bad, but all in all, it was okay.

Another strong ladies match showed off the very best in Banks, who has earned her way to Mania with a singles match against a worthy contender for the SmackDown Women’s title.

Carmella deserves a lot of respect as well. She really brought it that night, making this a solid ladies match. It was much better than their first encounter at the last PPV, which Banks also won by submission.

You can tell it’s starting to be that time of the year, as the ladies really picked it up for this match. It may have had the same ending as the TLC (Tables, Ladders and Chairs) match, but this was still very good.

Since the inception of the WWE “evolution” movement beginning a few years back which put a 30-women battle royal into place at the Rumble, the ladies have always delivered. This year was no exception.

From NXT wrestlers, to Smackdown and RAW main roster ladies, to the legends who got a nice pop from those on the screens, this was a solid, fun rumble match.

You could sense by much of the pre-match lead in that if Bianca Belair didn’t win, it would be an upset.

She and the 29 other wrestlers didn’t disappoint. Belair came down third overall, which just added more drama — maybe she WASN’T going to win the match after all. In the end, it came down to Belair, Rhea Ripley and Charlotte Flair.

The two younger wrestlers dispatched Flair and then spent a good few minutes going at it before Belair finally got Ripley over the top and won the match. 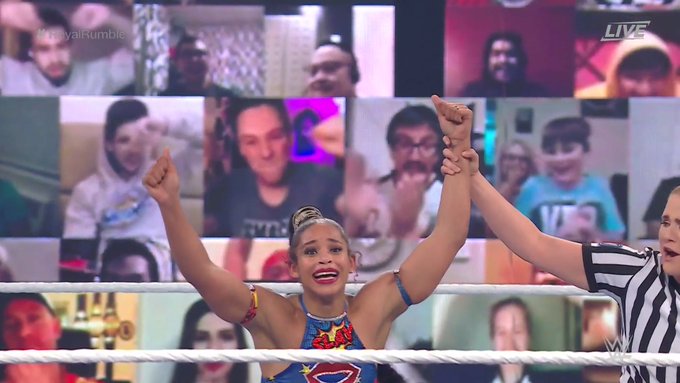 Belair lasted a women’s record 56:49, and you got the sense that this truly was the making of a star.

IF she faces Banks at Mania, these two could tear down Raymond James Stadium, much like Ripley and Flair did at the performance center for Mania a year ago. 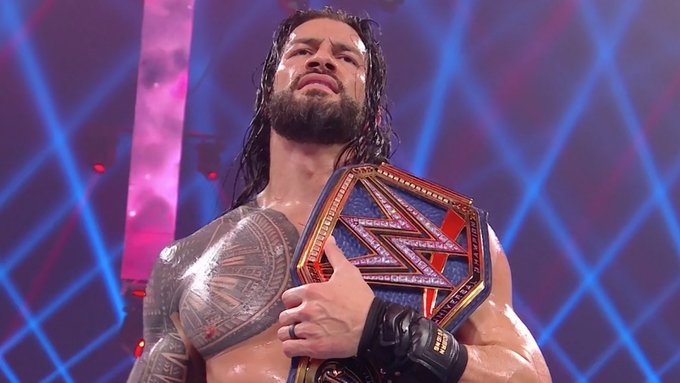 This should be the wrap up to a three-match trilogy between Owens and Reigns. The pair have now gone to battle in a cage match, a TLC match, and a last man standing match.

Without having to worry about pleasing fans, the pair made use of the backstage area as well Tropicana Field to administer a number of high impact moves.

Owens truly put his body on the line in this encounter. He was thrown around and took a solid amount of punishment before finally passing out following a guillotine choke by Reigns.

Now that the three-match saga between these two is over, Reigns is ready to move on to the main event, WrestleMania, yet again.

What a damn match!

Roman Reigns and Kevin Owens far exceeded any expectations set by fans for that one. Creative, brutal, believable. All you can ask for. #RoyalRumble

In a bit of a surprise, the company went with Edge as the winner in the men’s rumble, and it seems like a match with Roman Reigns will likely be in his future.

There wasn’t a ton of surprises in the men’s match, as they didn’t have as many empty spots to fill as the women’s match.

Seeing Edge and Christian together was a nice moment, but it seems like more and more that they are still going to push the Edge-Randy Orion feud that we saw last year at Mania.

A lot of things can happen between now and Mania, but Sunday was a very good start to the best “season” in wrestling.