Yes, basketball, baseball, and hockey are back, but it’s August. Meaning, it’s approaching football season, the season for sports bettors.

Let’s look at the best Super Bowl bets for the upcoming season (assuming there is one), via FanDuel: 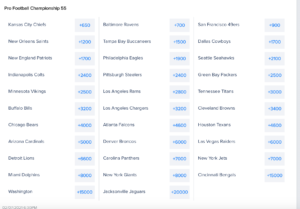 The NFL is too unpredictable to bet favorites. Even in a truncated offseason that benefits established coaching staffs. Every year, one team goes from good to great. If you find that team early, that’s where the value is.

At +1900, the Eagles jump out. Carson Wentz, when healthy, is a top-five QB in the NFL. The last time he was fully healthy, in 2017, he was the MVP frontrunner. In 2019, Philadelphia won the division with AAF-level receivers — mostly due to injuries. As long as the entire team, including Wentz, doesn’t limp into the winter months, the Eagles can compete for the NFC. Darius Slay is a high-impact CB, who bolsters the backend. The NFC East is, again, winnable; Philadelphia should host at least one playoff game.

Further down the list, are the Browns at +3400. No, I don’t see Cleveland winning the Super Bowl; however, that’s an enticing long-shot bet. The roster is there, on both sides of the ball. Talent-wise, Cleveland ranks near the top of the league. A year after premature, ill-advised Super Bowl chatter, expectations have diminished. Which is exactly what the Browns needed. Cleveland is making the playoffs.

Baltimore and San Francisco are the two best teams, by far. Kansas City has the best player; don’t mix it up. As long as Jimmy Garoppolo doesn’t throw the ball too much, it’ll be hard to knock off the 49ers. They are too deep, too skilled, too creative.

The Ravens have the best roster in the NFL. Lamar Jackson is a video game. And the team’s secondary is the best since the Legion of Boom. This offseason, Baltimore got even better adding Calais Campbell and drafting J.K. Dobbins.

Man, I can’t wait for football.