Warning: the following article contains spoilers for the rest of the NBA season.

It’s a special time for sports-talk shows on TV. With the Super Bowl out of the way, the hosts no longer have to pretend to know or care about football, and they can do what they are paid to do: react to the NBA regular season.

Stephen A. Smith is the face of this genre, and he didn’t disappoint on this Monday morning in February. After seeing the news that Anthony Davis re-aggravated his Achilles tendon, Stephen A. called the Lakers’ season over. Per Stephen A., the Brooklyn Nets won the NBA Championship last night, Feb. 14.

The bosses over at ESPN are loving the topic selection. Stephen A’s take even made the front page of dot com. Try topping this, other sports sites: 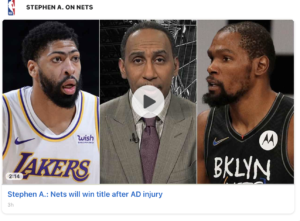 Translation: because the Lakers won’t have Davis for some regular-season games — OutKick’s Dr. Chao and others say Davis should be back for the playoffs, if not earlier — the Lakers can no longer stand in the way of the mighty 16-12 Nets.

Well, it was a good run, Lakers.

“But what if Davis is 100% healthy by the playoffs when the games actually matter?” Lakers fans may ask. You heard Stephen A. It will be too late. The regular season will already be over.

Winning championships in February is no small task, especially after going 3-3 in the month, as the Nets have. By the way, can someone please tell the nine teams with better records than the Nets to pack it up and stop wasting our time?

I do hope, for next time, that ESPN puts the SPOILER — written just like that — label on other takes of this magnitude. Those who casually look around the web for news and see this clip will have the ending of the NBA season ruined for them, just like that.

Not great, ESPN. Be better.

Anyway, congratulations to the Brooklyn Nets. You guys earned this championship.