Lost in the many devastations of 2020 was the delay of The Many Saints of Newark, the upcoming Sopranos‘ prequel film. Wednesday, Warner Bros. announced the film is now slated for a September 24, 2021 release in both theaters and on HBO Max.

“A look at the formative years of New Jersey gangster, Tony Soprano,” the synopsis begins. “Tensions rise between African Americans and Italian Americans in Newark, N.J., in 1967.”

The Sopranos is a Mount Rushmore series and considered by many experts to be the gold standard for television programming. The show’s creator, David Chase, is behind the upcoming film, which will feature many of The Sopranos’ most notable characters. 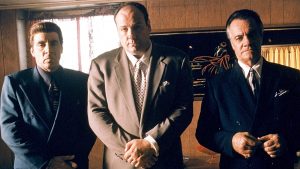 Hopefully, we will get an appearance from the chain-smoking, methodical Johnny Sack.

Between 2021 and 2022, The Sopranos prequel is set for release, Better Call Saul will conclude, and the Lord of the Rings series (Amazon) and House of the Dragon (HBO) will debut.

Of the four, which are you most looking forward to? Comment below: