Senator Josh Hawley told Outkick.com this afternoon that he’s not looking for ESPN or its superstar NBA reporter Adrian Wojnarowski to apologize for his profane email response to the Republican lawmaker’s letter questioning the league’s social justice messaging.

“No, I don’t want an apology. I want ESPN to ask the NBA why they won’t let players stand up for America and be able to criticize China’s actions,” Hawley said. “But maybe ESPN won’t say anything because they benefit from the NBA’s global presence. Until ESPN speaks out, all they are really doing is enabling the Chinese Communist Party to stifle free speech in America.”

Friday morning Hawley shared with the media the letter he wrote to NBA commissioner Adam Silver that asked the league to approve messaging on the back of player jerseys that supported police officers, freedom protesters in Hong Kong and American patriotism. The NBA has sanctioned its players to choose messaging consistent with the Black Lives Matter protest movement.

Wojnarowski, the league’s top insider, responded to Hawley’s letter with a 2-word email reply: “Fuck You.” Hawley shared Wojnarowski’s email via Twitter. Wojnarowski has yet to respond to an Outkick request for comment.

Hawley told Outkick that a number of lawmakers share his concern over the NBA’s relationship with China. The junior senator from Missouri blamed the media for failing to properly educate the public about the dangers of China’s influence.

“The truth is that your decisions about which messages to allow and which to censor — much like the censoring decisions of the CCP — are themselves statements about your association’s values. If I am right — if the NBA is more committed to promoting the CCP’s interests than to celebrating its home nation — your fans deserve to know that is your view. If not, prove me wrong. Let your players stand up for the Uighurs and the people of Hong Kong. Let them stand up for American law enforcement if they so choose. Give them the choice to write “Back the Blue” on their jerseys. Or “Support our Troops.” Maybe “God Bless America.” What could be more American than that?” 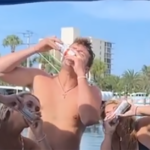 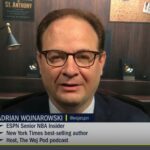