Tuesday, the Brevard Zoo released a 370-pound sea turtle back into the ocean. The female loggerhead is the largest sea turtle patient ever to take up residence in the zoo.

Just look at this monster: 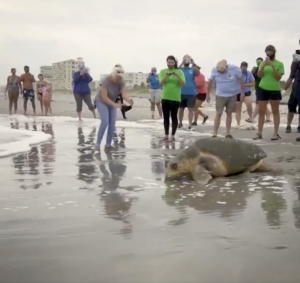 “This massive sea turtle was observed struggling to nest by Florida Fish and Wildlife Conservation Commission in late July, and an initial exam performed on the beach revealed abnormalities such as an old, healed injury on the shell; swelling; and weakness,” the zoo said in a statement.

“After several nights of failed nesting attempts, Perseverance was rescued from the beach with assistance from BCOR and University of Central Florida, then transported to our Healing Center in the middle of the night on July 31.

“Ultrasounds by our veterinary team indicated that Perseverance had difficulty passing eggs. She was induced by our team and laid over 100 eggs, which were buried for incubation near Archie Carr National Wildlife Refuge in Melbourne Beach.”

I’m willing to bet that a live TV broadcast of Perseverance laying eggs would beat ratings for the NBA Finals. Talk about laying an egg.