Rushdie was stabbed in the neck and his current condition is unknown. The male suspect was taken into custody and has not yet been publicly identified.

He was slated to speak at the Chautauqua Institution as part of a lecture series that features writers who have been exiled under threat of persecution.

Since writing “The Satanic Verses” in 1988, Salman has been considered sacrilegious and irreverent by many Muslims. So much so that in 1989, Iran’s then-leader, Ayatollah Ruhollah Khomeini, offered a reward of nearly $3 million to anyone who took Rushdie’s life.

In 2012 an Iranian religious foundation upped the reward for killing to Rushdie to $3.3 million. 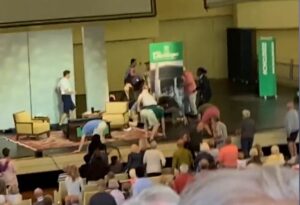 New York State Police released the following statement shortly after the author was attacked and transported to a nearby hospital:

“Rushdie suffered an apparent stab wound to the neck, and was transported by helicopter to an area hospital. His condition is not yet known. The interviewer suffered a minor head injury. A State Trooper assigned to the event immediately took the suspect into custody. The Chautauqua County Sheriff’s Office assisted at the scene.” 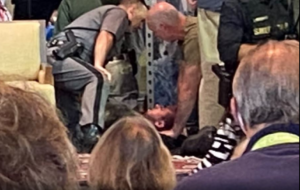 Earlier this afternoon New York Governor Kathy Hochul addressed the attack in a press conference, stating in part: “We want people to feel that freedom to speak and to write truth.” She later went on to thank the state trooper on hand who “stood up and saved” Rushdie’s life.

UPDATE: New York Governor Kathy Hochul says author is alive and has been transported to a local hospital.

Hochul adds that the event moderator was also attacked. pic.twitter.com/8xVwxbLtAD

Henry Reese, founder of a literary non-profit, was on stage alongside Rushdie at the time of the attack and suffered a minor head injury that is not believed to be serious.

This is a developing story and OutKick will update as Rushdie’s condition and more details become available.