With the possible retirement of future Hall of Fame quarterback Drew Brees and a number of free agents still on the roster, there’s no doubt that the New Orleans Saints will have a very different look in the 2021 season.

Wide out Michael Thomas is another question mark, and it’s unclear whether he will remain with the Saints next year or go elsewhere.

Thomas had a forgettable 2020. He was hurt for a good portion of the season, and when he did play, he just didn’t have the same impact that he had in years past.

Thomas was silent in the divisional game loss to the Tampa Bay Buccaneers. He did not have a single catch, though Brees and backup quarterback Jameis Winston threw a total of 20 completions.

After the game, Thomas, likely frustrated by the season’s end, put out a tweet that implied that he wanted out of New Orleans.

The tweet was a GIF of Kansas City Chiefs receiver Tyreek Hill from Kansas City’s matchup with Tampa Bay in late November. 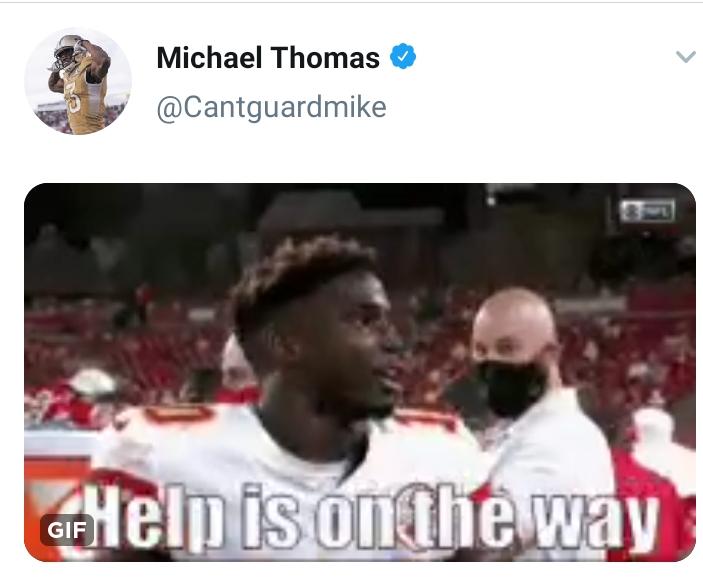 That day, Hill also paid respects to Hall of Fame tight end Shannon Sharpe by taunting the Tampa fans, telling them that “help is on the way.” Sharpe did the same to New England once when he played with Denver.

While many have speculated about the meaning of Thomas’ tweet, one possible interpretation is that he wants to join Kansas City or Tampa Bay.

Thomas has since pulled the tweet, however, so for now, all things in New Orleans are back to normal.

Thomas inked a five-year, $100 million contract extension back in July of 2019, so the ball is very much in the Saints’ court if Thomas really wants out. They are the ones who will ultimately make the decision.

It was also announced Tuesday that Thomas will have surgery on a torn deltoid and other injured ligaments in his high ankle.

Saints’ WR Michael Thomas is likely to have surgeries on both the torn deltoid and other injured ligaments in his high ankle this offseason, per source. He knew it was likely Drew Brees’ last year and didn’t want to miss out trying win a Super Bowl with him.

With all the offseason movement that is expected with the Saints, who knows if New Orleans would really consider moving Thomas.

For now, fans can only speculate about what’s next for Thomas and his future.