The NBA’s best current storyline involves a couple of big men watching the playoffs from home – Jazz center Rudy Gobert, and Shaquille O’Neal, who hasn’t played in more than a decade.

Gobert and O’Neal have engaged in an entertaining war of words over the last week. The verbal fencing commenced when The Big Aristotle took aim at the slender Gobert via his podcast, The Big Podcast with Shaq.

“You know what I’m gonna do to him?” Shaq said of the thought of having Gobert guard him. “He’s a shot-blocker. You can’t shoot a shot. You gotta back his little skinny ass up under the rim and then show him the [elbow] so he get scared and then just go up and dunk it in his face.”

After cohost Spice Adams suggested to O’Neal that Gobert, a three-time Defensive Player of the Year, would limit Shaq to just 12 points, O’Neal responded: “Yeah, 12 points in three minutes.”

Upon hearing Shaq’s comments, Gobert fired back, tweeting: “I would lock his ass up,” including a lock emoji. 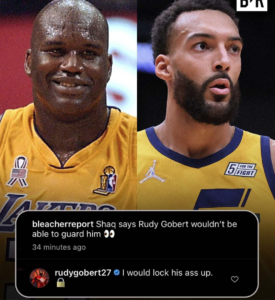 For those who may have forgotten, Shaq was listed at 7’1, and more than 330 pounds. He was essentially a Chevy Suburban in an NBA uniform. About the only thing that could slow The Diesel down were a flat tire or a police presence.

Gobert, an All-Star, stands as tall as O’Neal but weighs almost 100 pounds less (245). The Frenchman led the NBA in blocks during the 2017 season and regularly finishes within the league’s top five in both rebounds and blocks. His defensive prowess earned him the moniker “The Stifle Tower.”

While it’s easy to appreciate Gobert’s confidence (or is it naivety?), most would agree that a one-on-one between him and Shaq would serve up French toast.