Parents, be prepared to cover those kids’ eyes. No, there’s no pending boob shot on Cinemax, HBO isn’t showing Scarface again, and your neighbors ass isn’t peering out of his jeans while he trims the hedges. It’s just a couple of NFL players taunting one another. And to Washington coach Ron Rivera, that’s something our kids shouldn’t see. 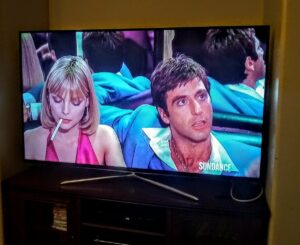 In speaking with the media, Rivera addressed the NFL’s new controversial stance against taunting: “Quite honestly, we don’t need the young people to see that. We don’t need the pop warner, peewee football kids seeing us act like that. We want to put it out there as professionally as possible.”

Riverboat Ron, who’s on the NFL Competition Committee, is all for some excitement after a DB lands a little bingo, bango, bongo on the opposition. He would just rather see players celebrate with their teammates rather than taunt the opponent:

“If you make a great play, great. Be excited, but don’t do it towards your opponent. That’s all we’re asking. That’s what the rule is for. ‘Cause what we don’t want is an escalation of some things that have happened in the past. I think last year, two teams got into it where wide receivers and DBs were going at each other. A year ago, we have one where two teams are going at each other. I mean, you don’t want to see that situation. That’s not a good look for any sport, let alone football and somebody’s going to get hurt and you just don’t want that. And that’s why they’re doing it. That’s what the emphasis, that’s why everybody’s just got to relax, calm down.”

Let this be a lesson to NFL players across the league. Next time you bulldoze a linebacker on your way to a first down, be a gentleman and shake hands with your teammates. Maybe let loose and slap some familiar helmets. But don’t dare taunt the opposition. After all, the kids are watching.