When you gotta go, you gotta go. And former Red Wings Zamboni driver, Al Sobotka, answered nature’s call by letting loose into a drain inside of Little Caesars Arena in Detroit in early February. The result? Relief and a spot in the unemployment line.

Sobotka’s public pee (if you consider peeing between two Zambonis in the basement of an arena “public”) was unintentionally witnessed by a male employee, who reported Sobotka to HR. Sobotka, who spent 51 years as the Zamboni driver for the Detroit Red Wings, was briefly suspended then fired.

Fast forward two months and Sobotka alleges he was discriminated against because of his age (68) and disability (benign prostatic hypertrophy). He’s seeking financial compensation in a lawsuit against Olympia Entertainment, a sports and entertainment company that owns the hockey arena in Detroit. 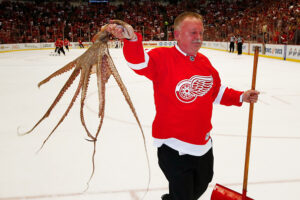 According to the lawsuit, the area in which Sobotka relieved himself is closed to the public and only an all-male ice crew has access to the area.

“He thought no one was in the building,” Deborah Gordon, Sabotka’s attorney said. “He was given no warning, no second chance.”

The case is now in the hands of Wayne County Circuit Court in Michigan. Time will tell if and how they’ll rule on the matter. In the meantime, Olympia Entertainment, you shouldn’t be surprised if you receive word that urine trouble.