It wasn’t exactly a banner season for Andrew Benintendi, and now the Boston Red Sox appear to be making the left fielder available.

According to Sean McAdam of Boston Sports Journal, the Texas Rangers, Houston Astros and Oakland Athletics have all “checked in” on a potential Benintendi trade. But despite the rumors, the Miami Marlins are not among those interested, McAdam added.

All of this follows a report from The Athletic’s Jim Bowden that the Red Sox have been in “serious trade talks” about moving the former No. 5 overall draft pick. The Red Sox are “looking for prospect(s) type return with emphasis on pitchers and outfielders,” Bowden reported. “Nothing imminent though.”

Benintendi, 26, will likely be best remembered for his four hits in Game 1 of the 2018 World Series. The Red Sox went on to win the series over the Los Angeles Dodgers.

Benintendi signed a two-year, $10 million deal in February 2020, then recorded his 500th MLB hit in July, but he struggled most of last season, missing time with a rib injury before being shut down for the season in September. He was just 4-for-39 at the plate (.103) with one RBI. 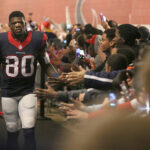 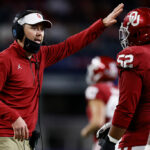