The news is once again about COVID with stars Aaron Rodgers and Saquon Barkley landing on the dreaded list. We discuss whether Rodgers lied about his status and how many other Giants might test positive elsewhere. Here, we want to discuss the Thursday Night football game.

We have ridden the hidden injuries not reflected in public lines to a 24-16 record against the spread. Use the Field View and SIC score information, not as picks from a tout, but rather information to make your own best wagering/DFS/fantasy decisions. 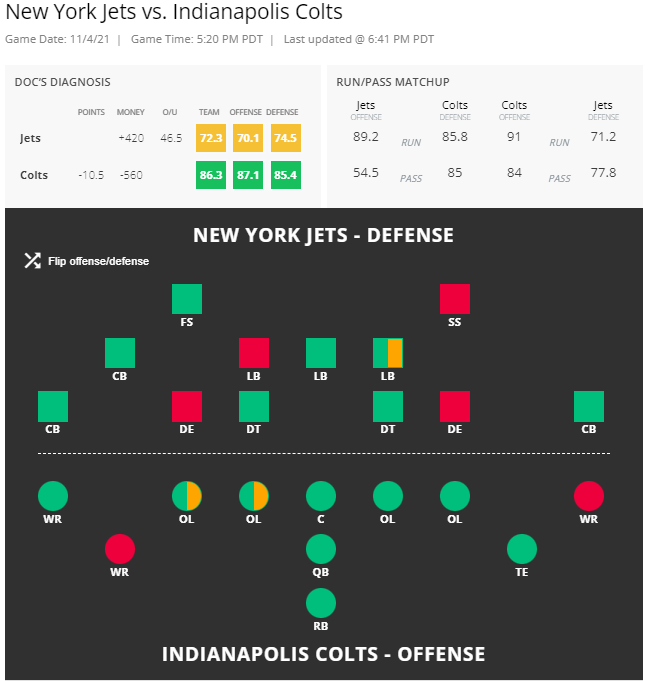 Both teams are under .500, and the Colts are only a game ahead of the Jets in the win column but are favored by double digits. Certainly, the overall team, offense and defense scores favor Indianapolis. Their offensive line has gotten healthier with the return of star left guard Quenton Nelson as he helps Eric Fisher and his Achilles recovery too. QB Carson Wentz is fully healthy, but he is short two of his top three receivers.

The Jets will be without Zach Wilson for several more weeks with a PCL sprain, but his replacement threw for over 400 yards in an upset win and Mike White’s game jersey is currently on display at the Pro Football Hall of Fame. Can he repeat or does game film lead to a better defensive game plan? The Jets are still without their No. 1 WR and starting left tackle. Defensively, they got healthier with the return of C.J. Mosley from hamstring; however, four other defensive starters are out.

In summary, the 30.5 SIC score differential for the Colts’ pass defense over the Jets can justify the double-digit line.

Not exactly a marquee national game matchup, but hopefully the fantasy/DFS/wagering plays with the help at www.profootballdoc.com turn this into a fun and profitable evening.

Sports Injury Center (SIC) Score is our proprietary numerical injury grading system that incorporates the health of every NFL team and individual players to give sports bettors, DFS players and fantasy owners an edge each week during the season. While it purposely doesn’t take into account coaching, schemes or matchups, SIC Scores give an accurate assessment of team/player overall health heading into a game.