Well, well, well…look what we have here! It’s a member of the British royal family having a problem with part of the U.S. Constitution, specifically the part about freedom of speech. Appearing on the Armchair Expert podcast, Prince Harry decided to make some headlines.

“I don’t want to start sort of going down the First Amendment route because that’s a huge subject and one in which I don’t understand because I’ve only been here a short period of time,” Harry said on the podcast. “But, you can find a loophole in anything. And you can capitalize or exploit what’s not said rather than uphold what is said.”

“I’ve got so much I want to say about the First Amendment as I sort of understand it, but it is bonkers,” he added.

And that’s how you get the attention of American politicians and blue checkmarks from coast to coast. Calling the First Amendment “bonkers” is exactly how a couple who keeps claiming to want their privacy gets even more attention.

The responses have since trickled in, and Harry’s taking a beating on this one:

Megyn Kelly: “‘Better to remain silent and be thought a fool than to speak and remove all doubt.’ (Lincoln or Twain or someone smarter than Prince Harry.).”

For a couple that just wants to raise their kid or kids, they sure find ways to create headlines. You’d think Harry, 36, would just want to get acquainted with his new country, enjoy hanging with the neighborhood dads as they bitch and moan about not being able to crush garage beers because the kids have dance recitals, baseball games, college visits, etc.

Instead, the guy drops First Amendment and “bonkers” in the same sentence. Bro, what are you doing, besides guaranteeing more media coverage that you claim to despise? Harry reminds me of the guys out there who feel like they have to parrot the talking points of their wives because it’s the only way to keep things sane in the house. It’s not going to get better, fellas. You’re wasting away the prime years of your life agreeing with a woman so she’ll be more tolerable.

Get a hobby, BRO. Buy an old car and restore it. Watch thousands of hours of YouTube on how to run brake lines. Make yourself a garage bar. Learn how to run all your own electrical lines. Take up plumbing. This guy literally went on a podcast to parrot his wife to make her happy, and she’s never going to be happy. She’s completely miserable. He’s miserable. Oprah’s miserable from having to talk to these two.

Yeah, that looks like a blast. GET A REAL HOBBY, BRO! 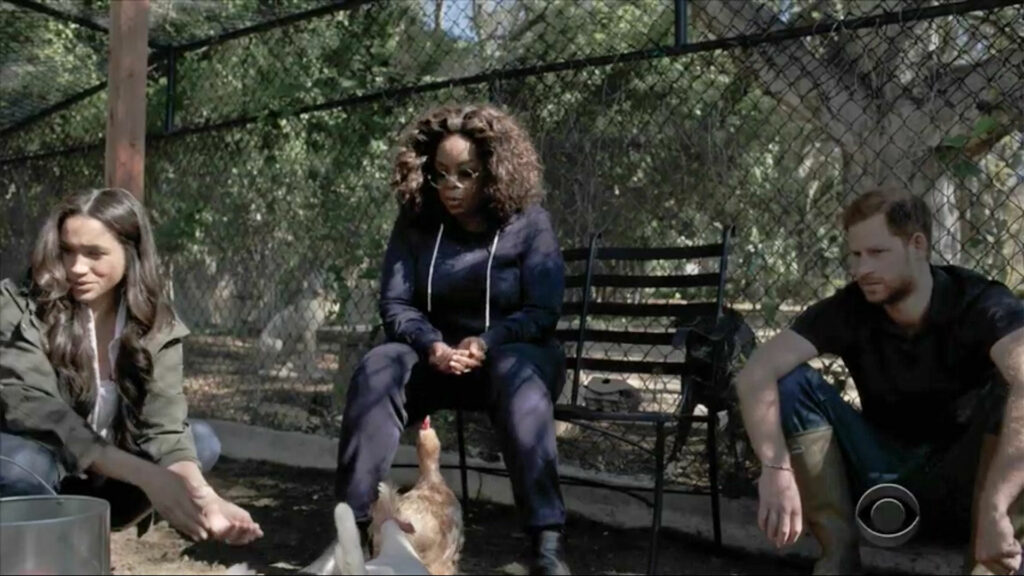 I’ll give Harry 4-5 years before he hits the breaking point and the marriage is over. This is no different than marriages across Ohio, Indiana, SE Michigan. Name a state. There are thousands of guys like Harry trapped and making stupid statements on Facebook while sitting on the toilet after another rough day at the job site.

Get yourself together, fellas.