Playboy model Luana Sandien wants to get her hands on the infamous handkerchief that Lionel Messi used to soak up the tears and snot that poured out when the Barcelona legend announced August 8 that he was leaving the club. Messi described the moment as a “a cold shower” and called it “the hardest moment of his career.”

The tears streamed down. Last week, it was announced that the tissue Messi used to wipe away the pain would go up for auction and that piqued the interest of Ms. Sandien, a huge Barcelona fan. A price tag of $1 million was put on the handkerchief, but that didn’t stop Luana from throwing a bid on the table for the seller to think about.

“I bid $600,000 to get the Messi handkerchief gone [sic], after that the ad disappeared,” she told European media outlets. “I gave more than half the advertised amount believing I would win, but the ad disappeared after my bid, out of nowhere. 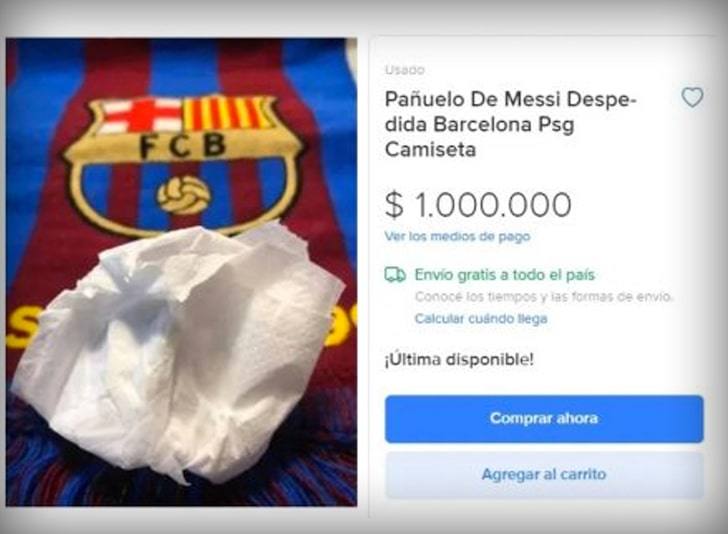 “The ad went off the air without giving more information about the outcome of the case, so we don’t know if anyone bought the artefact, or if the advertiser gave up on the idea.”

What was Sandien’s plan with the used tissue? She claimed it would be used as a prop for a naked photoshoot. This is marketing 101 during the Internet era. I have to believe the plan was to pay the $600k, do the photoshoot and then resell the tissue to some other fan for well over the $600k, take the profits and reinvest them somewhere else.

It reminds me of my plan with Cam Newton’s BCS game pants. I turned those things into millions of pageviews with an initial cost of $1,500. Do you guys realize the value of millions of pageviews? Way more than $1,500 and I still own those pants. That reminds me, does anyone want to buy Cam’s pants? I probably should sell those to an Auburn collector.