New Arkansas coach Sam Pittman is very familiar with the lay of the land in the SEC having worked at Georgia. His new quarterback, Felipe Franks, also has a strong sense of what is what after three years at Florida.

Both know that the situation in Fayetteville — and the Arkansas football program — is not on par with their former stops. They also know that the future of the Razorbacks can be rebuilt from the ground up as they also look to prove themselves.

Pittman spent four seasons as the offensive line coach for Georgia before returning to Arkansas where he held the same position. He inherited a program that has lost nine consecutive games – one short of the longest losing streak in school history. Arkansas has also lost nine consecutive conference openers since beating Georgia 31-24 to kick off the 2010 conference calendar.

Pittman said that his relationships at Georgia still mean a lot to him.

“I’ll be honest with you, I’m a crier, and if I had to step in front of them I would’ve balled my eyes out,” he said on the weekly SEC teleconference. “I love those guys to this day.”

He will also have another set of emotions to keep in check.

“However, am I nervous? Yes. Why? Because they are really good. They are an outstanding football team,” he added.

What Pittman has working for him is the return of his running back and an experienced signal caller.

Rakeem Boyd rushed for over 1,000 yards last season. He will be a focal point of the offense and one way for Franks to settle in.

This season is a proving ground for the former touted prospect.

Franks threw for 4,593 Passing yards and 38 TD passes during his previous three seasons with Florida. He transferred to Arkansas after a leg injury limited him to just three games in 2019.

He — in no shocking fashion — beat out redshirt freshman KJ Jefferson and true freshman Malik Hornsby for the Razorbacks’ starting job, and was named captain.

“Being Captain has allowed Feleipe to be more vocal,” Pittman told ESPN Arkansas. “It also has allowed him to be a swaggier player.”

Arkansas has lost 19 straight conference games — the longest league losing streak for the Razorbacks since they joined the conference in 1992. The most recent conference victory for the team came at Ole Miss, 38-37 on Oct. 28, 2017.

Unfortunately Georgia has won all five of its most recent trips to Arkansas, including a 45-32 victory in Little Rock in 2014.

The game kicks off at 4pm Et. 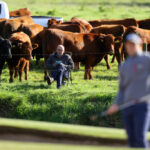 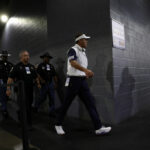