A wild week for the Green Bay Packers came to a close Friday afternoon with a little comedy, thanks to the genius of Packers offensive lineman David Bakhtiari, best known on the Internet for his ability to chug beers, who presented Aaron Rodgers with a new golf cart customized all the way down to the license plate ‘LUVN69.’

Bakhtiari’s present to his quarterback comes just two days after the future Hall of Famer unloaded on the Packers organization in a press conference where Rodgers went as far as taking a shot at the Green Bay travel bureau by saying people don’t come to town for vacation, they come to town to play football with him.

As for the inside story to the golf cart present, it goes back to Rodgers complaining that Bakhtiari, who signed a huge deal with the Packers that will pay him $92M over four years, gives horrible gifts. Rodgers joked on the Pat McAfee Show that his highly-paid offensive lineman once got him a used Aston Martin. 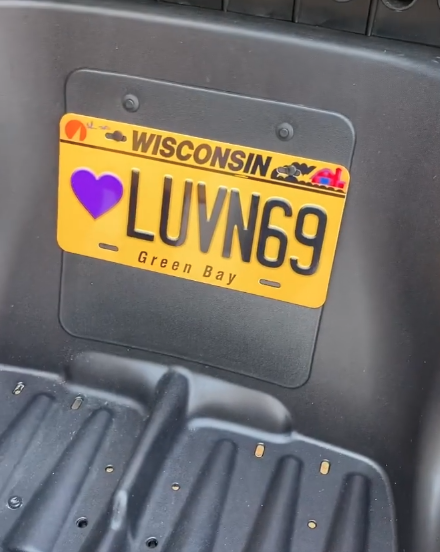 And it was a model. A toy. A 1/16th model or whatever size they are these days.

“It’s a model Aston Martin that looked like it was used as well,” Rodgers explained. “So, it wasn’t even a new model that he spent time putting together from Hobby Lobby or Michael’s or something.”

Rodgers noted during the December 29, 2020 appearance that Bakhtiari was supposedly getting him a souped-up golf cart.

And here it is! Rodgers finally got a nice present from his offensive lineman. This is a good way to end the work week. What a high note.