After the 2020 NFL schedule release, we listed our thoughts and seven key matchups. Translation: it’s time to dive into the over/under win totals.

Here are the best bets on the board.

*All odds via FOX Bet.

11 is a lot of wins, but I’m taking the over, anyway. I just don’t see this team losing three more games than it did last season. Baltimore was a schedule release winner. Its final six opponents missed the playoffs last season and Colts-Patriots is its hardest back-to-back stretch. The Ravens’ talent is ridiculous. Their run game was unstoppable last season. Now, insert J. K. Dobbins — uh, yeah. The toughest game on the schedule is the projected AFC Championship Game preview with the Chiefs. The Week 3 matchup is in Baltimore, where they will be favored. I generally don’t take overs with a number this high, except this is a 12-13-win team.

The easiest bet on the board. Over.

The Chargers have the third-best roster in the AFC and are coming off an A− offseason. Chris Harris is still a game-changer, Nick Vigil adds much-needed depth at linebacker, and Bryan Bulaga bolsters the offensive line. Tyrod Taylor isn’t Patrick Mahomes, though he’s an upgrade. Philip Rivers was disastrous a season ago. The Chargers have an ideally soft four-week run into their — convenient — Week 10 bye: Jets, Dolphins, Jags, and Raiders. They always play the Chiefs tough, who they face Week 2 at home in-between expected wins against the Bengals and Panthers. Los Angeles, led by Derwin James, gets to eight wins by mid-December.

After a series of heartbreaking playoffs exits, the Saints are now the NFL’s good guys. Add in the possibility this is Drew Brees’ final season, they are the league’s best story. Yet, I’m taking the under.

No division is as loaded at quarterback as the NFC South. A position New Orleans used to reign supreme at over its rivals. Its non-divisional matchups are highlighted by a motivated Aaron Rodgers, a losable game at Denver, and a showdown with San Francisco. Additionally, the schedule was a gift to the “NFL hates the Saints” group. The December month, which is not kind to quarterbacks over 40, is brutal. It goes at Atlanta, at Philadelphia, Kansas City, and Minnesota on Christmas Day.

(At least the refs are always on their side…)

Another great story. Another under to take.

There’s never been a more challenging season, due to the pandemic, to switch teams after two decades. It’s going to take Tom Brady and his teammates time to figure this out. Schedule-makers didn’t grant them time with an opener in New Orleans and a September trip to Denver. One early season upset loss will have the Bucs hovering around .500 come November.

Why are we assuming Tom Brady, who turns 43 in August, reverts to G.O.A.T. status? I’m not buying it. Put me down for 8-8, which could be good enough for the NFC’s seventh playoff spot.

I know, betting against Mahomes is foolish. But …

Kansas City has the target on its back now and its schedule isn’t kind. Unlike the Ravens, the Chiefs’ 50-50 games are on the road: in Baltimore, in New Orleans, in Tampa Bay, and in Buffalo. Each team in the AFC West got better in the offseason. Something else to consider: the new playoff format. There’s an indisputable drop-off after the Chiefs and Ravens in the AFC. And if Baltimore is as dominate as I expect, Kansas City will be locked into the second seed after Week 14. The elimination of a bye per conference incentives a set No. 2 seed to rest their starters the final few weeks. The defending champs could add a loss or two late in the season, as a result. 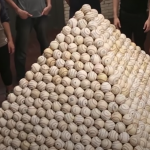 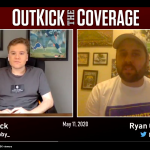