On today’s Outkick the Show, Clay Travis shared more positive data on the coronavirus front. Clay also praised Texas for not only allowing professional sports to return on June 1st, but for also allowing 25% of crowds to be present, commented on the NFL owners deciding to vote against the proposed onside kick rule, questioned the NBA and their decision to finish their season at Disney World after Disney World has opened to the public, and criticized the NBA for their hypocrisy regarding China and Hong Kong, especially in light of recent developments in China which will quell the hope for democracy in Hong Kong. Clay concluded by commenting on Connecticut’s court decision that ruled against transgender high school students competing in athletics. The court said it was a violation of Title IX and Clay believes this was the right call. 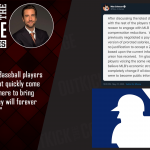