I’ve got 12 more picks coming for you this weekend, which are, of course, going to go 12-0, but I also want to ask you to please buy my new book, Republicans Buy Sneakers Too. It’s $17 right now on Amazon and if you don’t want the hard back book, you can buy the nine hour unabridged audio version I recorded myself.

Okay, let’s get on with the picks.

We were on an absolute roll last Saturday night. With Alabama having easily covered and Mizzou up 27-10 on the road at Purdue, it looked like we were cruising towards a 10-2 night. Then bad beats arrived. First, Alabama and Ole Miss couldn’t combine for 15 points in the entire second half in Oxford after scoring 56 in the first half and Mizzou couldn’t hold its 17 point lead late first half lead. In a real kicker, Purdue, which should have allowed Mizzou to score so it could get the ball back, elected to permit Mizzou to kneel and kick a short field goal on the final play of the game to lose by three, killing those of us who had Mizzou under a touchdown.

Even with these two bad beats, however, your hero, that’s me, managed to post an 8-4 record for week three, running our overall record on the season to 22-16, which is good for a 58% winning percentage so far this year.

The weekly Outkick picks are presented by SportsBookReview.com, which features the best one stop shop to compare prices on games anywhere on the Internet. The site will also let you know which side all the betting action is on, which is a pretty phenomenal resource as well.

So here we go with the Outkick picks presented by SportsBookReview.

Everyone knows I love James Franklin, but next week Penn State plays Ohio State at home in Happy Valley. This week they have a Friday night kickoff for a road conference game against a drastically inferior opponent.

I just think it’s hard to take a team to win a conference road game on a Friday night by four touchdowns or more.

Particularly when, as is the case here, we’re talking about an Illinois team that has actually looked somewhat decent in the first three weeks of the season.

While most of the money will be rolling in on Penn State as a big favorite, I’m taking the Illini here with a ton of points.

This game is a perfect example of why you should be an Outkick VIP member. On Monday afternoon I gave this game out to my VIPs at 69.5.

Now the over/under has surged all the way out to 77.

This is one of the highest over/unders I’ve ever seen, but I thought it opening around seventy was crazy. Why? Because Josh Heupel’s team is averaging 47 points a game and Lane Kiffin’s FAU team is averaging 41. I went to public schools in the South for K-12, but even I can do the math there and tell you that adds up to 88.

My first blood bank guarantee of the week? It’s the over in this game.

Last week I told you I didn’t think Notre Dame was that good. And I told you to take Vanderbilt. The Commodores nearly won in South Bend.

This week Notre Dame is going on the road against Wake Forest and the Demon Deacons have been pretty good under Dave Clawson.

But no one ever bets on Wake.

So give me Wake to keep this one close and potentially steal it late.

First, I don’t think Kentucky is awful. They dominated the line of scrimmage against Florida two weeks ago. Second, it’s tough to win road games in the SEC by double digits unless you are an infinitely more talented team than you are playing against.

And I don’t think that’s going to be the case.

I think Kentucky will be able to run the ball enough on Mississippi State to keep the Bulldogs honest and I think this will be a one score game for most of the contest.

Ultimately Mississippi State wins by a touchdown or less, but you get a cover.

Dana Holgorsen and Will Grier have been waiting two weeks for this game thanks to the hurricane and I think Holgorsen wants to pour on the points to get Will Grier back into the middle of the Heisman race.

Plus, I don’t think Kansas State is very good at all.

So give me the Mountaineers to win by three touchdowns.

My prediction for the Razorbacks? Pain.

Look, when you give up 44 points at home to North Texas and then you’re going on the road against an Auburn team that blew a game against LSU in the final eight minutes, I think Gus Malzahn is going to get medieval on that Razorback ass.

Last year Auburn won by 32 in Fayetteville, the year before that they won by 53 in Auburn.

This is going to be a pure bloodbath.

I know I issued a public apology to Coach Orgeron and LSU fans for not respecting their program, but this seems like a let down game for LSU.

You beat Miami and Auburn in two of the past three weeks and now you come back home to play Louisiana Tech? And this is the week before you fully dive into SEC play? I just don’t see it as a good place to back LSU.

That’s particularly the case when Louisiana Tech is not awful.

So, yep, I’m going against LSU for the third time in the Outkick picks. So far I’m 0-2 on those picks. You’d think I’d learn. But here we go again.

I’m not sure Vegas can set the Alabama lines high enough right now. So far the Tide are 3-0 against the number and none of those three games have been remotely close to not covering.

If Bama plays Tua for the entire game I think they’d cover against anyone, including A&M this weekend.

Plus, while we’ve spent a ton of time talking about the Bama offense, the defense has been phenomenal too, giving up 14, 7, and 7 points despite the fact that the offense is scoring so much the opposing team is getting a ton of possessions.

That’s why I’m not touching the over here and just relying on the Tide to cover with ease.

All Dino Babers does is cover.

And so far this season UConn has given up 56 to UCF, 62 to Boise State, and even 49 to Rhode Island. And you’re telling me they’re going to go on the road against Syracuse and not give up at least 50? Come on.

The only reason I’m not taking the over is because Syracuse’s defense was so good last week against Florida State it has me scared they’ll stifle UConn’s offense.

So while I’m avoiding the over the Orange cover this one with ease.

Florida at Tennessee under 49, now 47

Neither Florida nor Tennessee have very good offenses or consistent quarterback play.

This is Jeremy Pruitt’s first massive game at Tennessee. It’s under the lights at night and, honestly, if he wins this game he’s made the 2018 season a success. Because if he beats the Gators he gets the Vols to 3-1 and he’s able to withstand the gauntlet of losses at Georgia, at Auburn, and against Alabama over the next month. (Good Lord, by the way, on that stretch of games.)

So what’s Pruitt going to do? He’s going to coach the kind of game he’s most comfortable in, a defensive slugfest filled with grind it out offensive drives.

Florida doesn’t have the offensive firepower to stretch the field and end the slugfest so gear up for sixty minutes of brutal football.

I think one team beats the other 21-17 here — I’m not sure which way it will go — but the under hits with ease.

It’s my second blood bank guarantee of the day.

This line has moved against me, but I think the money is going the wrong way here.

I know South Carolina and Vandy have both scored some points so far this season, but I think this game is going to resemble the one we just saw Vandy play against Notre Dame, relatively low scoring and down to the wire.

Ultimately Will Muschamp and Derek Mason know this is a slingshot game, win it and high expectations remain possible, lose it and your opportunities are significantly diminished.

The reason I can’t bet on Vandy to cover in this game, by the way? The Commodores have lost nine straight games to the Gamecocks, the longest consecutive losing streak the Commodores have to anyone in the SEC East.

I don’t think Mizzou can slow down Georgia and I think they know it. The result? The Mizzou offense, which will be the biggest defensive test the Bulldog defense has seen so far, is going to come out guns blazing and just try to turn this game into a track meet.

Which means you need to be on the right side of history and take the over.

There you have it, boys and girls, get rich and go 12-0 this coming weekend.

And go sign up for Outkick VIP and get a signed copy of my new book, cheapskates. 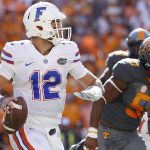