CNN’s Oliver Darcy took aim at Fox News’ Bret Baier in hope of getting a few thumbs up from the Left online. If he got any, they were brief. Seconds later, Baier crushed him during a commercial break.

Bored online while watching Fox News, Darcy handed Baier a “dereliction of duty” card, for not covering President Donald Trump to his liking. What exactly was Darcy hoping for? Not sure. Apparently, he doesn’t either.

Check out this swing and miss:

Sorry you missed the beginning of the show Oliver. And the panel segment —but thanks for the tweet. https://t.co/jqRVi9fNi7

Darcy then pulled a Don Lemon and doubled-down, only to get annihilated once again:

I am mid-show. But you may want to rewind Kevin Corke’s piece -the discussion with the panel. It’s called balance. You should try it. Thanks for always tuning in. https://t.co/yJ6mdx6C8n

You have to appreciate the timing of Darcy’s attempt. His Twitter rant came hours after Project Veritas leaked more audio of CNN President Jeff Zucker issuing commands, which include avoiding the Hunter Biden story and “not normalizing” Trump’s behavior. CNN’s David Vigilante also called Tucker Carlson a racist without evidence, we learned. Shocker.

The leaks from Veritas probably didn’t sting as much as this right hook, though:

Lol. This toolbox kissed a whole boatload of asses while running his mouth, pretending to be a conservative, to keep a job. When everyone discovered what a loser he was, he changed his grift game & found a home with the suckers at CNN, who swallowed his BS whole. https://t.co/pEdTpJX8PS pic.twitter.com/Y0FE06tXR6

(By the way, my thoughts and prayers go out to Bret Baier and his family as his son, 13, heads for his fourth open-heart surgery today.)

Now, on to CNN’s Christmas coverage: 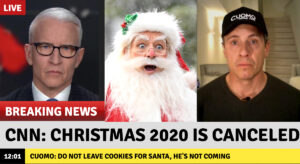