Currently neck and neck with Nebraska’s Decoldest Crawford for college football’s most unique name, Booty debuted his “More Than Just a Name” brand online at MTJN.com. General Booty’s using his clothing sales for more than just beer money and late night Taco Bell runs. 20% of the profits will go to Oklahoma Children’s Hospital at OU Health.

That’s a booty worth getting behind. 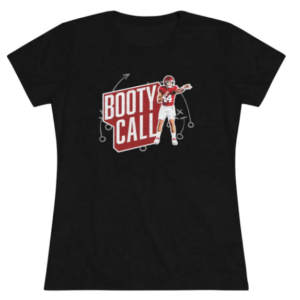 More Than Just A Name’s Booty-based clothing should be an instant hit with fans. A variety of shirts and hats for men, women and children ensure every last booty is covered. Amongst the creative slogans draped across the clothing are: “General Booty Reporting for Duty,” “I (heart) Booty,” “Booty Call,” and “Booty Bea.”

I’d imagine General Booty was teased about his name growing up, but he’s certainly the one cracking a smile these days.

Booty committed to the Sooners in May after staring at Tyler Junior College last fall. At Tyler, Booty led the NJCAA with 3,410 yards and 27 touchdown passes. Those numbers were aided by an October game against Navarro when Booty accumulated 528 passing yards and eight touchdowns.

Alongside his Tyler teammates, Booty wiped the field with Navarro, coming away with a 69-57 win.

Because of the NCAA’s Name, Image, Likeness policy that was introduced last summer, Booty was able to launch his clothing line, fatten his own pockets and at the same time, help children in need.

“Ever since I was a young kid playing quarterback, my name has grabbed a lot of attention. I’ve always tried my best on the field and off to give people a reason to remember my name. Based on the recent court’s ruling allowing Name, Image, and Likeness (NIL) deals, I wanted to use my name to support a great cause,” Booty said via MTJN.com. “Saying that, I am proud to announce my partnership with Oklahoma Children’s Hospital OU Health.”

A 6’2 sophomore, Booty said of his website that promotes his clothing line: “More Than Just a Name” was created to help children and their families who are going through some of the most difficult times in their lives. I’m excited to announce that 20% of the profits for any online orders will go directly to Oklahoma Children’s Hospital!”

Regardless of what he does on the field, Oklahoma already has themselves a decorated General with a heart of gold.