An Ohio woman Alecia Kitts was tased and arrested at an 8th grade football game after not complying with a state mask mandate and resisting arrest. Kitts was reportedly tased during the incident where she resists the officer applying handcuffs. “You’re not arresting me for nothing, I ain’t doing nothing wrong,” Kitts yells as the officer struggles to get her into handcuffs.

“This rule has been in effect since we were told we could play,” Logan athletic director Theresa Schultheiss told the Marietta Times. “Everyone that came through ticketing tonight was reminded, we had regular announcements over the PA reminding you that mouths and noses needed to be covered and we had signs at the bathrooms.”

A Marietta school board member was in the stands and saw the Taser being used on Kitts.

“It escalated pretty fast into an ugly situation, he tased her pretty fast,” Doug Mallett told the Times. “I didn’t see where she was putting anybody at risk, I guess that’s a Logan rule. It depends on interpretation, it’s a state rule, but I thought there was some wiggle room if you have health issues. I tried to stay out of it until he got the taser out.”

A man named Skylar Steward posted a Facebook Live video Wednesday showing him at the Logan Police Department filing a verbal and written complaint for removing Kitts from the football game. “This was my son’s mother arrested. I’m on my way to speak with officer Smith and his supervisor,” Steward wrote Wednesday night.

An attempt was made to contact the Logan Police Department to acquire a police report, but the call was unanswered.

Update: the Logan Police Department has issued a statement regarding the Kitts arrest.

Officer Smith was walking in the stadium and observed a female sitting in the stands without a mask, he approached the female and advised her she needed to put her mask on as required by the school policy. The female advised that she had asthma and was not going to put it on. Officer Smith advised the female several times that she needed to put her mask on, and that if she did not, she would be asked to leave and would have (to) wait outside the stadium. The female continually refused his request and Officer Smith advised her that if she refused to leave, she would be cited for trespassing and escorted off the property.

She continued to resist, and Officer Smith placed his Taser on her shoulder area and drive stunned her once. He was able to successfully handcuff the female at that time. An additional officer arrived and assisted in walking the female out of the stadium. She continued to try to pull away from the officers while being escorted out of the stadium and had to be placed into the cruiser.”

The female initially refused to identify herself. Hocking County Emergency Medical Services was requested and responded to the scene. The female refused treatment.

The female was later identified as Alicia D. Kitts. She was charged with Criminal Trespassing and released at the scene. Additional charges are pending on Mrs. Kitts and another female subject involved in the incident. 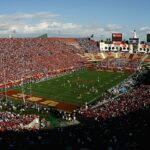