Today on OutKick, we look ahead to the NFL season and place our bets on the 2021 season leaders in passing yards, passing touchdowns, receiving yards, and rushing yards.

The passing yards category is where you are most likely to find value. The QB with the most passing yards is often not on the most talented roster. Instead, the season leader is frequently forced to throw the ball downfield in close games to give his team a chance to win. The last three leaders all missed the playoffs: Deshaun Watson (2020), Jameis Winston (2019), and Ben Roethlisberger (2018).

The Chiefs, Bucs, Bills, and Packers are so talented that their teams will likely opt to run the ball late in games this season, once they have a considerable lead.

That brings me to Matt Ryan.

Atlanta has just enough talent to compete for a Wild Card through Week 17. And here’s the key stat: Ryan led the NFL in passing attempts last season, with 407. But because of a 22nd ranked completion percentage, at 65%, Ryan ranked fourth in passing yards. If Ryan can uptick that percentage slightly, he has a solid shot of leading the league in yards this season.

Like Matt Stafford without Calvin Johnson, I expect Ryan to spread the ball around freely without Julio Jones. 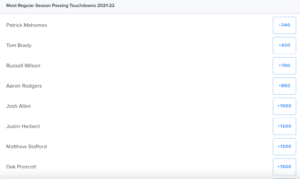 I don’t know how Aaron Rodgers ranks fourth. Last season, Rodgers led the NFL with 48 touchdown passes, eight more than Tom Brady and Russell Wilson, who tied for 2nd. While eight may not sound like a lot, it averages out to a three-week lead.

Lost in the trade drama is how well Aaron Rodgers fits in Matt LaFleur’s offense. Mahomes gets the attention, but Rodgers was the better QB last season. Stack them up side-by-side, and Rodgers wins. Yet Mahomes is favored to throw the most touchdowns.

Rodgers to Davante Adams is the best connection in the NFL. Thanks to a solid O-line, Rodgers has more time to throw than any other star QB. And despite the narrative, the Packers’ WR depth is strong. This season, Rodgers will again lead the field in passing touchdowns.

Again, a Packers star is ranked too low.

Rodgers will target Adams more often than any other QB/WR combo in the league. What’s more, Adams is more likely to catch the passes thrown his way than anyone else on the list. Davante Adams is the best receiver in the NFL — period.

Adams finished 5th in receiving yards last season only because an injury forced him to miss two games. On a per-game basis, Adams led the NFL with 98 yards a game, three more yards a week than Stefon Diggs. If Adams plays 17 games this season, he will lead the NFL in receiving yards.

It’s tempting to go for the favorite, Derrick Henry. Henry has led the NFL in rushing yards the past two seasons. Last year, it wasn’t close. Henry bulldozed his way to over 2,000 yards, leaving the second-ranked Davlin Cook behind at 1,550. However, running backs don’t last long, history warns us.

I’d look for value if you don’t bet Henry, given how close the rest of the backs are in skill and trajectory. I’m looking at Jonathan Taylor at +1100.

Taylor was born to run behind this Colts’ offensive line, which is perhaps the best in the NFL. And with Carson Wentz’s questionable health, the Colts will rely on the run game early in the season.

I like it. But I hate betting against Henry.

There you have it: