Here’s a full breakdown via the NYPD: 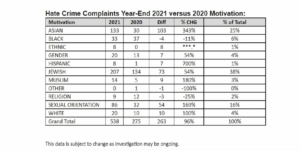 National awareness of hate crimes ticked upwards early last year but then quickly dwindled. Initially, the media spun crimes against Asians as a vestige of the Trump administration blaming China for COVID-19. However, once videos showed black perpetrators committing violence against Asians, the story disappeared.

Of course it did.

That’s unfortunate because we have a problem. You look at that chart and you see a broken society, one in which people attack others based on their ethnicity and skin color. The media is partly responsible for this because it so often portrays us as separated by race.

And then there are the politicians.

While New York hate crimes are eye-opening, NYC is hardly the only major city to see a surge in crime in 2021. Violent crimes are up in all major cities, including homicides. Hate crimes, like murders, rose as blue city leaders vilified and weakened their local police force. The retirement rate in police departments nationwide in 2021 jumped 45% over 2020, and another 18% of officers resigned.

“Nobody’s getting arrested anymore,” Robert Boyce, retired chief of detectives for the New York Police Department, said. “People are getting picked up for gun possession and they’re just let out over and over again.”

When public figures in media and politics divide us by race and impair municipal law enforcement, they are encouraging society to become more violent — 96% more violent, to be exact.

Anyway, enough about silly topics like violent crime. Turn on ABC tonight to hear the latest developments on the unnecessary voting rights bill and the guy with the goofy Vikings helmet at the Capitol.

By the way — that guy, who committed no violent crime, will rot in federal prison for the next three and a half years. That should help those in major cities sleep at night.