The woke activists, who have been on a mission to cancel Dave Chappelle, officially pounced on his warm body Wednesday when it was revealed that Chappelle spoke out against a housing development that is planned to go up behind his property outside the village of Yellow Springs, Ohio (pop. 3,700).

To the coastal elites, it’s an odd spot for one of the most famous comedians in the world to reside, but it has also been a place where he’s been able to hide out in relative obscurity without issues — until a developer came along, at the urging of the village leaders, to build new housing directly behind Chappelle’s residence.

During Monday night’s village council meeting, Chappelle spoke to council members and threatened to pull his business projects in the village — he’s in the process of refurbishing a fire station into a restaurant and a comedy club — over the 52-acre housing development that was initially going to be single-family homes, but the village asked the developer to include duplexes, townhomes, a small apartment complex, and single-family houses.

The developer agreed to the village’s request, and then the council needed to vote on whether they were completely on board with a mix of housing options.

“I am not bluffing. I will take it all off the table.”

Hey coastal elites, the guy doesn’t want housing at all behind his house.

After Chappelle spoke, Council President Brian Housh addressed the “litigation” that was referenced.

“This reference to the idea that we can deny the PUD (planned unit development) and then we can change the zoning in the interim and get a better property, I think, as a lawyer, hopefully, there’s an understanding that that’s not something that is viable and would certainly open up the village to exposure,” Housh said.

By the end of the meeting, council members moved forward with a plan for a developer to construct 143 single-family homes with starting prices of $300,000. The townhomes, the duplexes, and the apartments are officially gone from the project, but it’s unclear if that’s even what infuriated Chappelle in the first place.

It doesn’t matter to the bleeding hearts who have been waiting to destroy Chappelle after he withstood their cancellation attacks over his Netflix specials and their transgender jokes. All the wokes needed to see is that the initial project included apartments, and now it doesn’t.

CHAPPELLE’S A NIMBY! SEE? HE’S BAD FOR SOCIETY! CANCEL HIM! HE HATES POOR PEOPLE! HE WANTS TO RUN THAT VILLAGE LIKE A KING!

Chapelle’s moment at the mic: pic.twitter.com/TTfupcFZY8

Is Chappelle fired up because there’s a massive housing development going up behind his house? You’re damn right he is. He’s fired up just like all the other people who are going to have 143 houses built behind their houses. That’s right, he’s literally a NIMBY guy. You won, wokes. He’s NIMBY.

That leads to the question of why didn’t Dave buy the property when it came up for sale?

A deep dive into a local Yellow Springs Facebook page — which the coastal elite blue checkmarks didn’t do — shows that Chappelle’s wife, Elaine, admits that they were notified of the landowner intending to sell. But there was an issue when they inquired about the sale.

She says they were offered the Chappelle price for the land and balked out of “principal” (I think she meant “principle”) while declining the asking price from the landowner.

“Do you buy things when you know you’re being overcharged for it???” Elaine Chappelle wrote in December on the Yellow Springs Facebook page. “You guys only know bits and pieces of things that go on behind the scenes.” 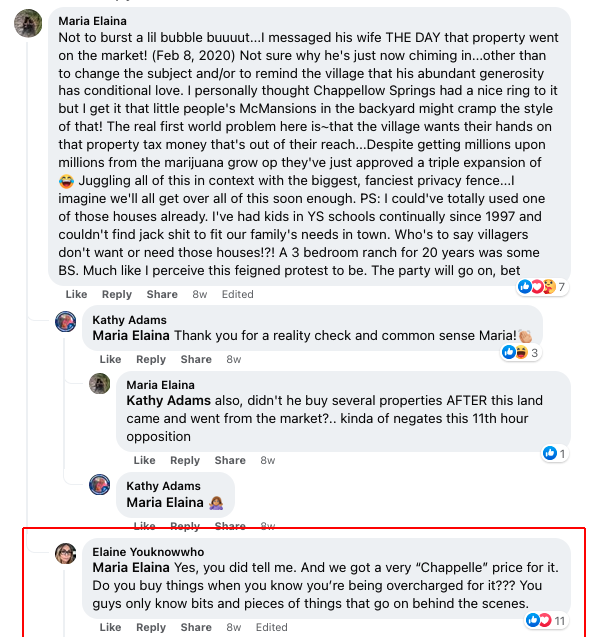 When pressed by another community member on why the Chappelles didn’t buy the land, Elaine had more to say.

“Sometimes it’s the principal and not the money, if you can believe that!!!” she wrote. 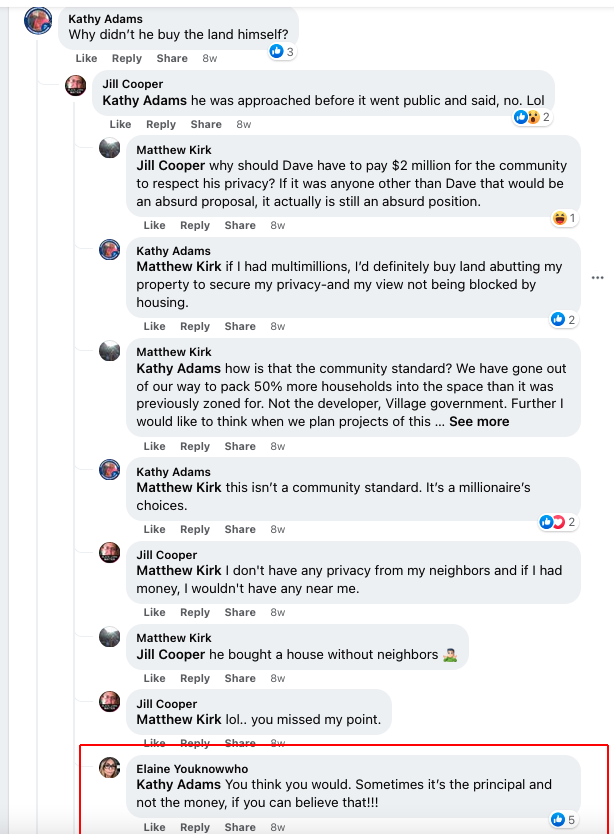 What’s the solution from here?

During Monday’s village council meeting, after Chappelle had threatened to pull his business over this housing development, George Oberer Jr., CEO of Oberer Homes, claims he met with Chappelle a year ago in September to show him the development plans “more as a good neighbor” and says there was an understanding that Chappelle had spoken to the previous owner about purchasing a piece of the land in question.

Oberer says that plan to sell part of the land made it less marketable to developers and wouldn’t have been interested in purchasing the land if “10 acres would’ve been sold out of the middle of it.”

Oberer adds that he wasn’t made an offer to sell the land to Chappelle during their meeting and didn’t say he would or wouldn’t sell it to the entertainer.

Again, what’s the solution from here?

1. Do Dave and George sit down and figure out a purchase price for the entire piece of property?

2. Is it even possible at this point?

3. Does Dave move to another part of the area and buy enough land to prevent going through another NIMBY moment?

4. Does Dave buy all the houses constructed behind his house and turn them into crash pads for comedians who come to town to work his club?

5. Does Dave tell his construction team to stop work on the comedy club and restaurant that Yellow Springs has been bragging about for well over a year?

6. Does Dave move his comedy club project to another town?

You’re in luck. Elaine Chappelle, on the Yellow Springs Facebook page, gave us some perspective on how things could change very soon if dirt starts being moved on that land behind their house.

She’s ready to move the projects to Dayton. 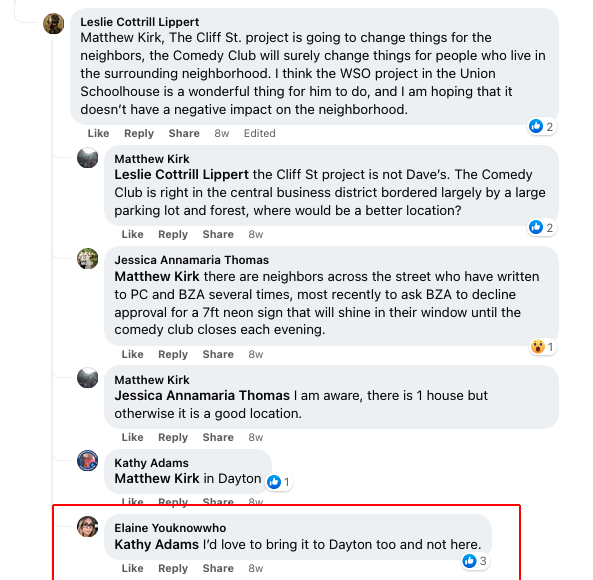 So while the coastal elite checkmarks are busy acting like Chappelle helped get affordable housing killed off in small-town Ohio, we’ll actually give you the facts as they stand. OutKick watched the council meeting and went through the Facebook discussions.

If Dave’s guilty of anything here, it’s that he’s guilty of thinking he can force the village into litigation to change the zoning on the property. The city doesn’t have the money to litigate, Dave. He’s also guilty of not brokering a deal to purchase the property and allowing it to fall in the hands of a developer who is now hellbent on building houses on that property in a town that is now a hotbed for people who want to live in hip Yellow Springs.

Watch the council meeting. Go to the 1:50:00 or so mark and listen to attorney Breanne Parcels explain why Dave’s “litigation” argument where the city could change the zoning on that property and kill off the project isn’t going to work in a court of law.

This notion that Dave’s out to get poor people kicked out of this housing development is nonsense.