Destin, Florida- If you were roaming the halls of the SanDestin Hilton on Tuesday morning you might’ve wondered why Nick Saban showed up looking dapper in his penny loafers. It’s an annual tradition for coaches, athletic directors and presidents to make their way to Destin for Spring meetings, but for some folks it might’ve been a surprise to see their team’s coach walking throughout the lobby.

The first morning of the SEC spring convention was filled with coaches from the biggest conference in college football, maybe even riding the same elevator as a family of five heading out for a swim. This is the type of atmosphere that comes with holding meetings coming off one of the biggest weekends in the country. Whether it be Lane Kiffin walking through the halls wearing fishing attire or coaches representing their school with polos, nothing is off limits in Destin.

There were multiple times on Tuesday morning where young kids or dads were staring in awe of who they had just seen walking up the hotel stairs. This is the type of access that you get in Destin. One minute you’re swimming in the hotel pool and the next minute you’re wondering if you just passed Kirby Smart in the hallway.

It’s a business trip for these coaches, letting their voices be heard on some important issues surrounding the conference. One of those issues is the current state of Name, Image and Likeness, which was a heavy talked about topic between the five coaches that spoke Tuesday morning. These coaches will have an opportunity to share their opinion, though it might not sit well with others. But this is why they meet to discuss these matter.

Missouri’s Eli Drinkwitz was cautious when talking about some of the hot topics around the meetings on Tuesday. It’s not because he didn’t want to discuss them, but because he didn’t feel like getting yelled at when the coaches met just an hour later.

“The goal is to not say anything ridiculously stupid, so I don’t get yelled at in the coaches’ meeting.”

The coaches are all sat in alphabetical order by school name in the coaches meetings, which put Drinkwitz and Mississippi State’s Mike Leach next to each other, which amused the Missouri coach.

“He only interrupts sometimes. He’s not a low-talker, like on Seinfeld.”

We know that these coaches were prepared for some of the questions regarding NIL, but some of them chose not to take the bait. A question was asked to Shane Beamer about NIL being a factor into why Spencer Rattler chose South Carolina, which the head coach said that Rattler did not have any deals lined up before he arrived in Columbia.

“From our end, none. Now I know he’s worked out some deals since he got to South Carolina, and good for him. But on the front end, nothing.”

After finishing with the early head coaches, I decided to roam the halls for a bit, looking for anything that stood out. I came across a man from Louisiana, along with his kids, who was staring at someone in the corner of the upper ballroom. As I was walking past him, decked out in his bathing suit and carrying snorkels for his kids, he tapped me on the shoulder and asked if that was Jimbo Fisher standing in front of him.

“Well isn’t that the wildest thing. I come down on vacation with my family and see the head coach of Texas A&M,” he said.

I had to let him know that if Jimbo Fisher shocked him, wait till they saw the guy wearing a pink shirt and a pair of blue Khaki pants.

“Saban is down the hall, enjoy your time with the family,” I subtly said as I walked away. 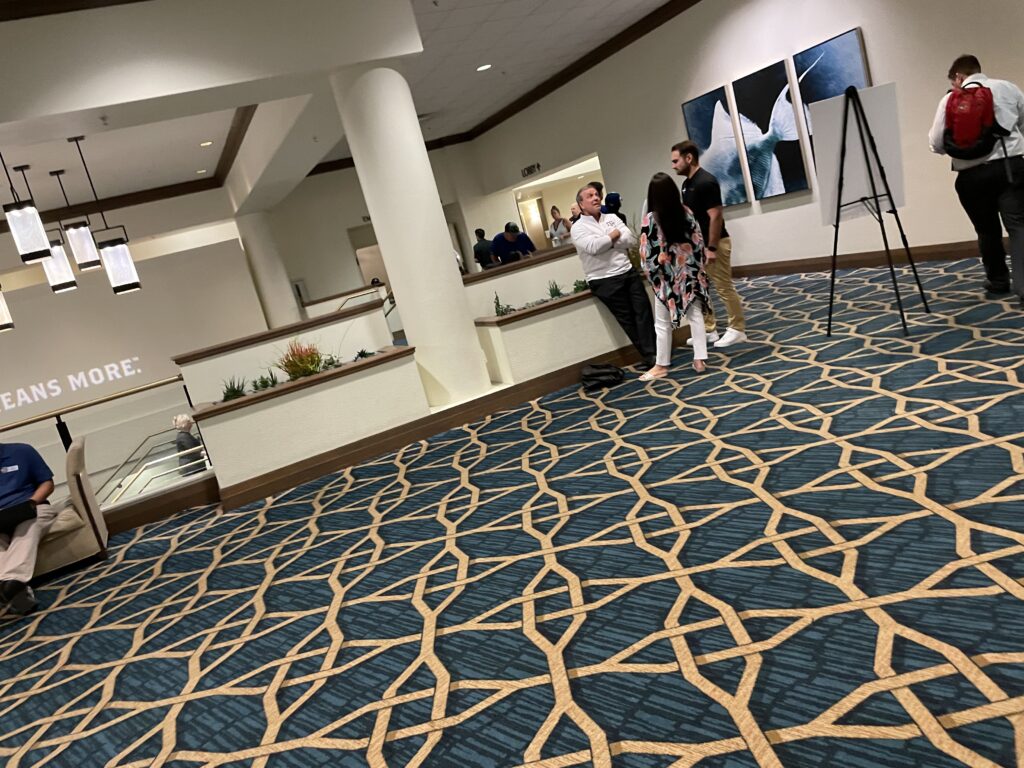 As everyone else in the hotel is enjoying their vacation and drinking pina colada’s on the beach, a bunch of head coaches are sitting in a conference room discussing how they could pay players and it make sense.

Not everyone comes to Destin for the clear water and strolls on the beach, well maybe just  Lane Kiffin.