Usually, after six weeks, an MVP frontrunner has emerged. However, there is hardly a frontrunner so far this season. There is, instead, a tight list of around eight players in MVP contention.

To help with the debate, I ranked the list 5-1, likely the most thought-out, in-depth, and accurate MVP ranking of the season. Here we go:

Voters won’t want to hand Tom Brady another MVP over a flashy QB under 30. So to win his fourth, Brady must definitively win the award. And perhaps he will.

By the end of the season, Brady may lead the NFL in key passing categories because the Bucs are about to feast in the coming weeks. Aside from a matchup with the Bills, the following defenses stand little chance against the Bucs’ passing attack: 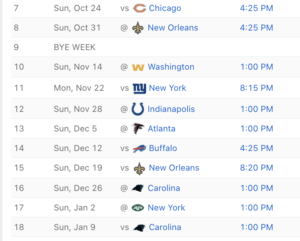 Baltimore came into the season surrounded by question marks. Thanks to Lamar Jackson, the Ravens have answered each question with the same answer: teams can’t defend Jackson. Period.

On third and longs, Jackson jogs to first downs. Additionally, Jackson now picks defenses apart from the pocket. How does a team defend such a dynamic? We don’t know. A team has yet to show us.

MVP awards are about memories. And who could forget Jackson’s Monday night against the Colts in Week 5? Baltimore recorded 528 yards of total offense against Indy. And get this, Jackson was responsible for 504 yards — that’s 96%.

Finally, Jackson wins games that other QBs don’t. On Sunday, Jackson, 24, set the NFL record for most wins by a QB under the age of 25 since the NFL-AFL merger (1970) by surpassing a guy called Dan Marino. Jackson is 35-8 as a starter and 5-1 this season.

Dak Prescott rose to the top of some MVP rankings Monday morning, coming off a masterpiece against the Patriots.

Prescott’s MVP case began last season after suffering a season-ending injury. Without Prescott, Dallas fell to pieces as one of the worst teams in the NFL. With Prescott this year, the Cowboys are among the NFL’s best teams. Keywords: most valuable.

Prescott’s leadership is as prevalent as his on-field heroics. Prescott has completed over 73% of his passes and thrown for 16 touchdowns, third-most in the NFL. Right now, Prescott is the most effective QB per throw.

While Josh Allen has yet to play in Week 6, the Titans hardly have the resources to dent his MVP case tonight.

Five of the last six NFL MVP winners were QBs who led their teams to a No. 1 seed. In the NFC, it’s a wild west of contenders, all equally positioned to finish first: the Packers, Bucs, Cardinals, Rams, and Cowboys. Meanwhile, Buffalo could walk to a first-round bye in the AFC. The Bills are better than everyone else and have a schedule almost comical. 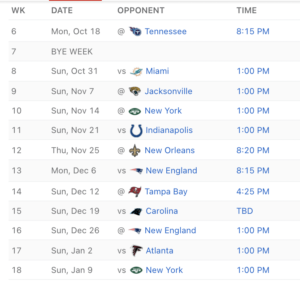 The Bills are finishing first in the AFC, likely putting Allen among the top two candidates for MVP.

Kyler Murray has been the most consistently great QB through six games this season, leading Arizona to a 6-0 start.

Murray’s MVP case could inflate or deflate on the national stage in Week 8 against Green Bay on Thursday Night Football. Unlike the other early-season candidates, Murray does not regularly play in primetime. So going toe-to-toe with Aaron Rodgers, last year’s MVP, is Murray’s opportunity.

The Brown and Rams have two of the NFL’s leading defenses. Yet Murray shredded them both.

Kyler Murray’s 116.2 passer rating ranks third in the NFL. Not bad for a QB known for his running ability.

*Bet on the NFL MVP now at FanDuel Sportsbook.