Here is the current playoff picture and breakdown of the NFC:

Week 12 is here and we still don’t know anything about the NFC.

The Saints sit atop, alone, at 8-2. But New Orleans is far from a lock for the Super Bowl. Drew Brees just broke another rib. And when he is healthy, his limitations give the Saints a ceiling.

If New Orleans holds onto the 1st seed, it goes into the playoffs as the favorite in the NFC. But with Taysom Hill’s question marks, it may not be a smart bet.

I keep going back to the Packers, even after they suffered their third loss in six weeks. With a soft remaining schedule, Green Bay has the easiest path to the first-round bye. Perhaps, the Titans knock off the Packers in Week 16. If so, this team goes 12-4, which projects to be right around where the Saints end, who lost the head-to-head tiebreaker to Green Bay.

In the AFC, seeding is key. The NFC is less about the number next to team names —aside from the sole first-round bye — than it is about the individual matchups. The 2020 NFC playoffs will be a classic game of Rock-Paper-Scissors.

It starts with the Packers. Aaron Rodgers and Davante Adams are enough to beat most teams. But as the past two seasons have shown, that’s not enough against physical, run-first offenses. Tampa Bay crushed, beat-down, and embarrassed Green Bay, a la the 49ers last season. If Rodgers and Brady meet in the postseason, take Brady.

Green Bay beat the Saints early in the year and match up with them favorably. Logic says that bodes well for the Bucs — wrong. What the Saints did, twice, to the Bucs makes Tampa’s dismantling of Green Bay look kind.

Green Bay would beat New Orleans but lose to Tampa Bay. The Saints would slide past the Bucs for a third time this season.

Then there is Los Angeles. Defensively, the Rams can bother both Tom Brady (as we saw) and Drew Brees, but the Rams defense is not equipped to take down Aaron Rodgers. I’d pick the Rams over Tampa and New Orleans but not over Green Bay.

Seattle can outscore all the top NFC teams. As we know, though, it can’t stop any of them.

Don’t rule Arizona out, either. Kyler Murray’s sly quickness is just the recipe to upset the Packers. They already beat Seattle once. Give Arizona a puncher’s chance.

Unlike the AFC, there are fewer NFC teams competing for playoff spots. The seven in now should hold. If one falls out for Chicago, it’s likely Tampa.

Brady is beginning to show grave signs of decline and has a meeting with Patrick Mahomes this week. Remember, Tampa must have a better record than Chicago after losing the head-to-head tiebreaker.

My gut feeling, today, Nov. 24, says that Packers and Rams in the NFC Championship Game. 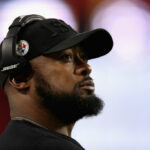 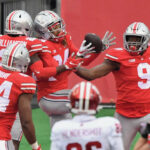