On Sunday, the New York Times featured on its homepage a photograph of a civilian family killed during Russia’s attack on Ukraine.

As screenshotted by Mediaite: 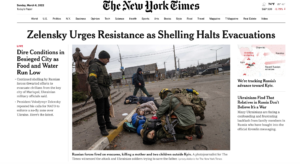 According to the caption for the image, the family had been trying to flee from Irpin before the attack. Only one of the four family members had a pulse at the time photojournalist Lynsey Addario captured the image.

The photo is harrowing, it’s hard to look at. But it’s also real. It happened. It’s happening to families all across Ukraine.

The Times’ decision is of note because the photo is not attached inside the link but is the story’s cover image and was on the homepage without a warning label.

That’s not a criticism of the Times. Media outlets long debated how to show real-time war images that include dead bodies. Sometimes there isn’t a right or wrong answer.

The Times took this same approach during a 2019 attack at a Nairobi hotel. At that time, another uncensored photos drew ire from some readers.

“[We are] balancing the need for sensitivity and respect with our mission of showing the reality of these events,” the Times said in a statement defending its decision.

“We want to be respectful to the victims and to others affected by the attack. But we also believe it is important to give our readers a clear picture of the horror of an attack like this. This includes showing pictures that are not sensationalized but that give a real sense of the situation.”

While the Times‘ decision on Sunday has drawn a strong reaction, most of the comments express understanding for the choice.

“Jaw-dropping from the New York Times. Always an agonised debate, how to depict war, how to get the balance right. A brave decision by @nytimes,” Guardian news editor Joanna Walters concluded.