Nikole Hannah-Jones, who won the 2020 Pulitzer Prize for Commentary for her work on the New York Times’ 1619 Project, briefly deleted her Twitter account before reactivating it about an hour later. Before deleting her account, Hannah-Jones deleted a tweet that distributed a conspiracy theory thread that expressed a belief that the government was setting off fireworks in the middle of the night to sow division in black and brown communities in Brooklyn. Here are screengrabs of the thread: 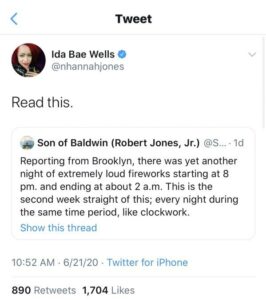 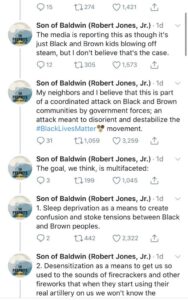 She tweeted this in response to criticism of her sharing the thread:

I think it’s interesting. I did not endorse, I did want to see what other people think about it. Sorry if that makes me less credible to you.

This goes without saying, but the New York Times has a difficult situation on its hands figuring out how to address this story, where their social media standards were almost certainly violated by one of their most well known authors.