If you’re like me, you were excited the moment you heard the rumor a few years ago that director Zach Snyder was going to ‘revamp’ and basically ‘remake’ the 2017 Justice League movie that wasn’t all that well received. You really wanted a ‘do over’ of the highly anticipated superhero movie.

Well finally, after all the talk and all the back and forth, we’re one day away from Snyder’s four-hour-and-two-minute vision coming to reality.

HBO MAX will debut Zach Snyder’s Justice League at midnight Thursday, meaning that with a four-hour run time, you’ll probably need a long afternoon nap if you want to stay up late and take in the multi-superhero flick as soon as it’s released.

If you’re not that ambitious and simply watch the movie at some point Thursday or even Friday, HBO MAX has released a “doctor note” so you can have a reasonable excuse to get out of work. 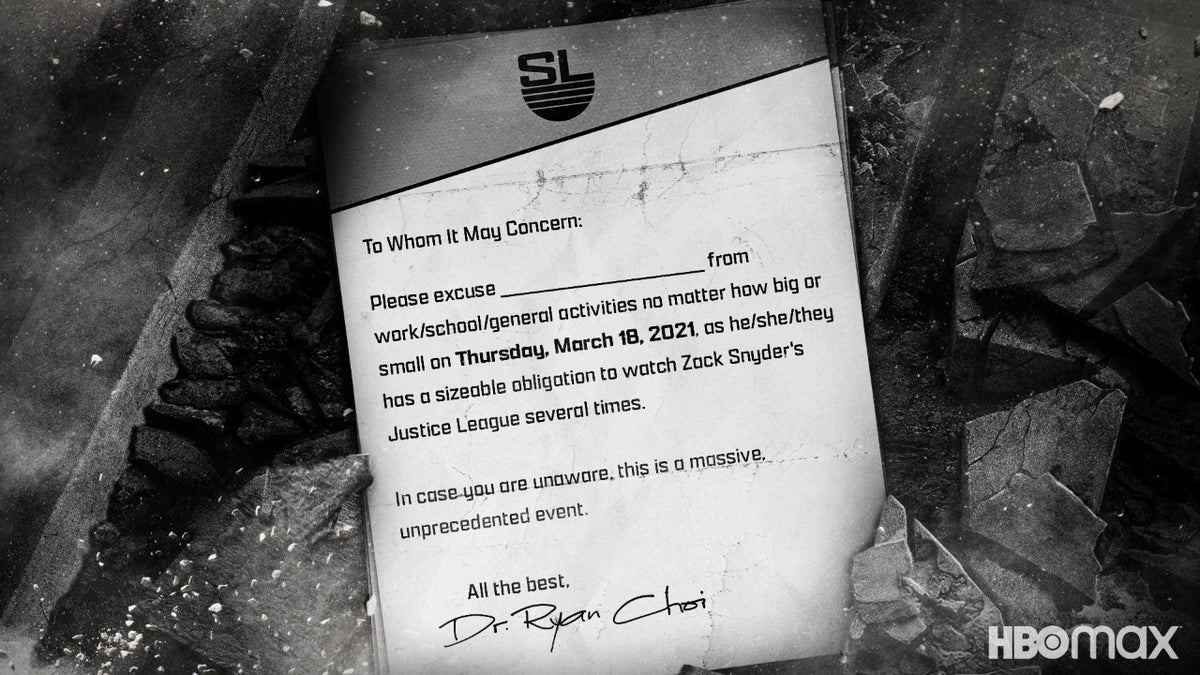 In case you missed it, the note is from Doctor Ryan Choi of S.T.A.R. Labs, played by actor Ryan Zheng. That was one of the roles that Joss Whedon eliminated from his theatrical cut of the 2017 Justice League.

In addition to the note excusing fans from life obligations to watch the Snyder Cut, Snyder himself confirmed the official Zack Snyder’s Justice League Watch Party event, where fans can watch the film along with him and even ask him questions.

That event will take place at 4pm PDT, and you can get an email with information by signing up prior to the start of the event.

Join me on Thursday at 4pm PDT for the official ZSJL Watch Party Screening. I'll be dropping in for a bit to answer some of your questions live before the screening. RSVP at https://t.co/PvDMghEQU2

The new version with the two-hour addition is already getting more positive responses than the version four years ago did. Right now, the movie is coming in at 78 percent on Rotten Tomatoes and 56 percent on Metacritic.

Variety’s headline of their review reads “The Director’s Four-Hour Cut Is Truly a New Film — and a Knockout.” Let’s hope the reviewer is right, and the lackluster movie from November of 2017 can finally be put to rest.