NBC is again in discussions to boot Chuck Todd off of “Meet the Press.”

As relayed by Mediaite, NBC brought in a new EP to mull over the future of the flagship program.

In May, we wrote about Todd’s uncertain future after NBC demoted Todd for the second time in the past year. Todd has been out of favor with management for at least two years.

In 2020, NBCUniversal chief executive Jeff Shell floated the idea of replacing Todd with Nicolle Wallace (yuck) on “Meet the Press.” Todd survived but got hit during the weekdays instead.

Then, the network kicked him off MSNBC entirely to host the show on something called NBC Now with a co-host, Kristen Welker.

Todd has much working against him. The ratings for his shows continue to slide. He’s a white guy — white guys are a problem, per MSNBC. He’s a rather loathsome bird on television. And, perhaps most damning, the Left, the primary audience of NBC, has turned on him. 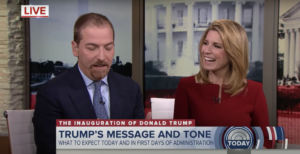 Todd is hardly right-wing. However, he’s not as blatant about his liberal biases as, say, George Stephanopoulos who hosts the counter program “This Week” on ABC.

At most, Todd will ask Democrats though questions, a tactic apparently frowned upon by corporate journalists:

If NBC demotes Todd a third time, it’d create another change in the once immutable Sunday morning news lineup.

— Jake Tapper moved to a twice-a-month schedule on CNN’s “State of the Union.”

Unfortunately, Stephanopoulos, the worst of the worst, remains.

Todd doesn’t project to have a strong market outside of NBC. The lack of demand for older news anchors is evident in the case of Brian Williams. Williams left MSNBC last winter with the expectation he’d land quickly. He hasn’t.

Perhaps Todd would stay with NBC in a diminished role, anchoring special events throughout the year.