It’s official. The Lakers will not make the postseason. LeBron James has failed to lead the Lakers to the playoffs despite handpicking his entire roster this season.

And that’s a positive. The NBA playoffs are more interesting without LeBron.

LeBron has contributed to the NBA’s massive decline in popularity over the past four seasons. For all of his stardom, he has overly politicized the league and divided sports fans along party lines.

For example, he inaccurately portrayed the Kyle Rittenhouse trial last year, and as a result, Clay Travis said, “There’s a very strong argument that LeBron has done more as an athlete to divide America than maybe any athlete in the 21st century.”

Then, LeBron doxxed a police officer who saved a young black woman from getting stabbed, prompting Fox & Friends host Will Cain to tell OutKick, “LeBron James, at least in the world of sports, is the single most destructive force to race relations in the United States.”

What’s more, LeBron is not even the television draw that he was early in his career. An eye-opening chart on the website Sports Media Watch reveals that of the 25 most-watched NBA games this season, only six involved LeBron, good for a tie with the Suns and the Nets.

Meanwhile, Steph Curry and the Warriors claimed over half of the entries with 13. Curry, not LeBron, is the biggest television draw in the NBA. Take a look: 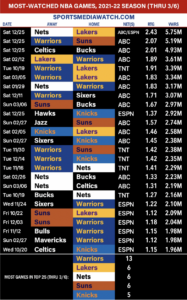 Viewers are fed up with LeBron. Now that he’s been eliminated, the NBA playoffs will certainly be less political and more welcoming to casual basketball fans.

At this point, the NBA needs to turn the page on the LBJ era. He’s a 37-year-old attention hound who has turned audiences away from watching up and coming stars like Ja Morant, Luka Dončić and Trae Young — all of whom are under the age of 24.

Without the Lakers dominating the conversation this postseason, Turner and ESPN will elevate these players into primetime.

Best of all, we won’t have to come across any of LeBron’s cringy postgame lies. Remember when LeBron claimed he read a book?

I think I might actually watch the NBA playoffs this year. What say you?