The Summer of Woke has moved over to the NBA shop where Adam Silver’s merchandising department will allow you to buy personalized shirts and jerseys featuring “FuckPolice,” but will not allow you to buy “FreeHongKong” gear.

Go try for yourself or enter some new word combinations to see if they pass the Chinese censors.

The NBA and the Players Association recently agreed to a list of social justice messages that players can wear on their jerseys during the NBA bubble restart at Disney World. That list includes:  Black Lives Matter; Say Their Names; Vote; I Can’t Breathe; Justice; Peace; Power to the People; Justice Now; Say Her Name; Si Se Puede (Yes We Can); See Us; Hear Us; Respect Us; Love Us; Liberation; Listen; Listen To Us; Stand Up; Ally; Anti-Racist; I Am A Man; Speak Up; How Many More; Group Economic; Education Reform; and Mentor.

Missouri Senator Josh Hawley’s letter to the NBA wondering why players weren’t given choices to support police, Hong Kong and patriotism was met with a “fuck you” from ESPN’s NBA reporter Adrian Wojnarowski.

Now comes an examination of what the NBA will let its customers put on a personalized jersey. It’s odd you can’t put “FreeHongKong” on a shirtsey, but you can drop a “FuckPolice.” You think that just happens by chance? To be fair, the NBA will let you buy a “FuckChina” shirtsey. “FuckLBJ” is also available. Same with “FuckLeBron.” And “FuckHongKong.” I also went through several “Free…” options and “FreeSyria” works; so does “Free Mexico” and “FreeRussia.”

But the minute you start trying to support Hong Kong there are red flags. I’m just sayin’.

The NBA bans you, the fan, from putting #freehongkong on customized league jerseys even as they allow players to wear customized jerseys. pic.twitter.com/px9enQa1qk

NBA.com will not allow you to add a “FreeHongKong” jersey to your cart: 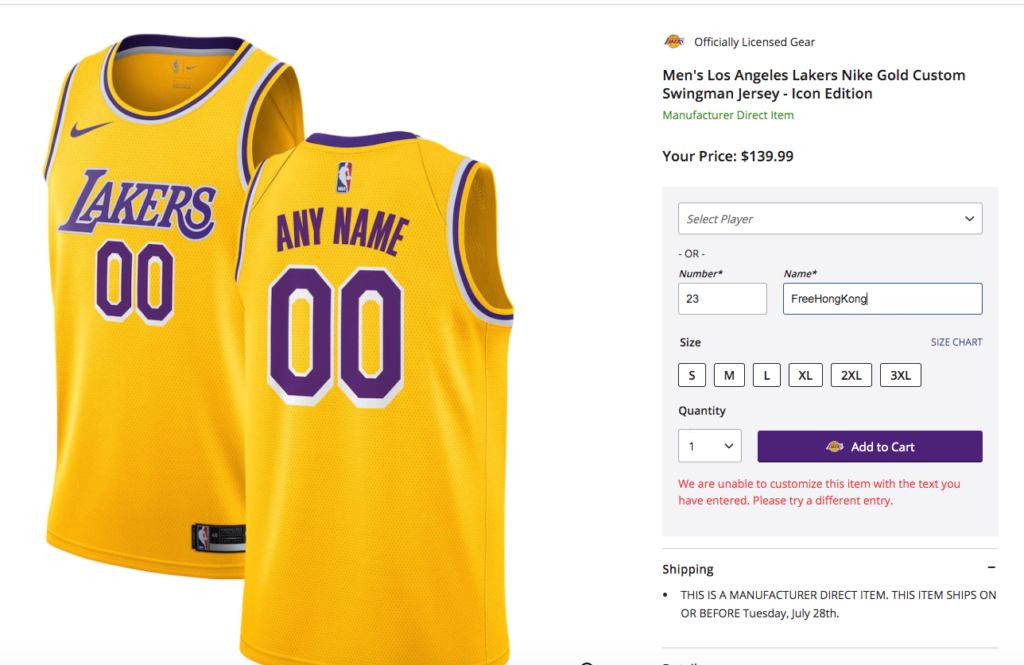 But you can add a “FuckPolice” jersey to your cart: