Nashville MMA fighter Donovan Salvato, 29, used an illegal ground and pound move during a fight with his roommate, according to cops who responded to a domestic violence call where Salvato allegedly bit his roommate’s balls, leaving 2 1/2 inch laceration, Nashville Scoop announced via a police report.

Police allege Salvato, 3-1 in his professional fighting career, had been engaged in an ongoing argument with the roommate over a lease agreement and it finally boiled over into this alleged ball-biting incident. After authorities finally caught up to Salvato, he said the strikes happened because of the grappling and said that the injuries sustained by the roommate, Abel Sosa, could have resulted from hitting various furniture.

Someone clearly analyzed Sosa’s balls because the police were able to come up with the 2 1/2 inch bite measurement. Police also noted bruises, a lip injury and swelling on Sosa’s head.

“If you know this individual do not trust your nuts around him. Literally the evidence I will be using in court is a piece of skin that he manage to rip from my testicles,” Sosa wrote on Facebook after the incident. “I received 3 stitches at the VA hospital and multiple injections to prevent dental infection from spreading, right onVeterans Day. I should have good ol Marine Corp eye [gouged] the son of a bitch. But so focused on maintaining control, never threw a punch. Victories are won with composure.” 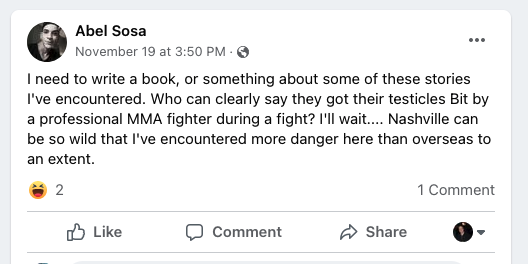 Sosa says Salvato bit him through his pants.

“While I was on the guard and I tried to stop him from choking me he took the biggest chuck at my nuts grasping on and tearing a piece of skin as big as a pinky. I received 3 stitches across my sack and now, my nuts look like scarecrow’s face,” Sosa reported on Facebook.