Nancy Grace, one of the top legal analysts in the country, sat down with OutKick to discuss the media’s role in the Kyle Rittenhouse trial.

Nancy also talked us through the genre of crime coverage and whether someone will ever crack the Zodiac Killer case.

Finally, Nancy will present the Back the Blue award at FOX Nation’s Patriot Awards tonight. She previews the event and her belief that the country too often misrepresents law enforcement:

Bobby Burack: The media can shape the reaction of a trial because they are the ones who inform the public — potential rioters — about a trial. Has the media covered the Kyle Rittenhouse trial in an informative, fair manner?

Nancy Grace: I have found that the media in the Rittenhouse case takes either one side or the other. A lot of media reporting articles are skewed one way or the other, from the writer or speaker’s point of view. I think that, especially in trials, you have to be careful about that. The case is not over until both sides have presented.

I think it’s very important, especially in the case where is the jury is not sequestered, that you’re very, very accurate in what you report. I don’t want to find that to be true. I find there to be a lot of projecting onto the facts of the case by both sides.

Burack: And the media has grossly politicized Rittenhouse’s actions for political gain.

Grace: Yes. The Rittenhouse trial comes at a time where society is very, very polarized. It’s either-or. Either you see Rittenhouse as a hero, the poster boy for the Second Amendment, or you see him as a gun-nut enthusiast hell-bent on causing trouble, on shooting someone down, looking for a target.

I found that in the Rittenhouse trial that it’s not only polarizing but it got to the point where the speaker or the writer is not able to accurately look at the facts and determine whether it was self-defense. Was it or not?

Burack: What crime story in your career had garnered the most interest? I assume the OJ case. If so, what was No. 2?

Grace: What a good question. Orenthal James Simpson comes to mind. The Casey Anthony case garnered a lot of interest, a case that was very publicized. It goes on and on. There are so many cases I can’t even begin to count them.

People often ask me: “What is your ‘favorite’ case?” I can never answer that. I don’t have a favorite case. I consider every crime victim to be equally important. I don’t consider one victim to be more spectacular than the other. I don’t see them as they work for one set apart from the others. Some of them are more famous, but that does not mean they’re any more special and more important than the other.

Burack: Do you believe we will ever learn the identity of the Zodiac Killer?

Grace: Hmm. That’s so interesting that you ask me that. So it is always a conundrum. It fascinates me, no matter how old that case may be, people still wonder about that. And I think that that’s because, inside of us, we, the human nature, want the right outcome. We want justice to prevail. Also, there’s an idea that you want to solve the mystery. That you will put all the pieces of puzzles together.

As you know, there is a team of specialists that claim they have identified the Zodiac Killer. Do I think it will ever be proven conclusively? Yes, I do. I really do. And I’ll tell you why: Every day, we see cold cases solved. Whether it’s through witnesses finally coming forward, or a long-lost letter that emerges in someone’s attic or stuffed into a book, or advances in DNA technology’s crime-solving techniques.

Because of breakthroughs that happen every single day and are happening right now, I believe that many cool cases will be solved. And yes, I think we will absolutely get the answer to the Zodiac Killer. 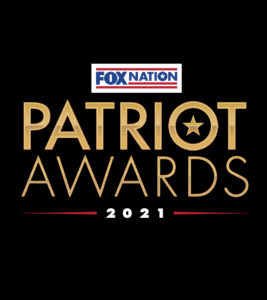 Burack: Tonight, you’re presenting the Back the Blue award at the Fox Nation Patriot Awards. What’s behind that and what can viewers expect from the show?

Grace: Oh my goodness, I am so proud of Back the Blue. I couldn’t be happier being part of it. And I’d like to point out that the particular officer that I will be presenting to is a rookie cop that has saved nine lives in one year. It’s so important that we honor the men and women that protect us every day. They’ve certainly gotten the black eye over the past years.

Yes, I know that there are bad cops out there. But having worked shoulder to shoulder with police my entire legal career, they are some of the most honorable people I’ve ever met. Ready to not only just talk the talk but to walk the walk, to put their life on the line for what they believe. And that is very, very rare.

You know, the police have horrible pay. So many of them work second and third jobs. I remember prosecuting. Very often, it would take me days to reach a cop, discuss testimony, or discuss a case because they were literally all working night and day. We often have to go find them on the job and talk to them out in the street to talk to them about a case that they have worked, you know, six months before, during all the police reports in the Federal Circuit. [They have to] remember the case because they’d be in a second job.