Thinking about becoming an accessory to murder but not interested in going to prison? If so, you should do the exact opposite of what Lorraine Graves did. Don’t log into Facebook, creep on a couple of exes, accept a friend request or two, then inquire about a local police department post about the reward money offered in relation to your whereabouts.

Graves’ curiosity (and possibly her bank account) was piqued late last week when the Tulsa Police Department took to Facebook to seek information about the accessory to murder suspect. Knowing precisely where the suspect was located, Graves couldn’t help but chime in, saying: “…where’s the reward money at.” 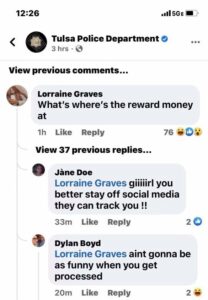 A member of the prestigious “Tulsa’s Weekly Most Wanted” club, Graves was sought for her alleged role in the murder of Eric Graves. Two other suspects, Jayden and Gabriel Hopson, had previously been arrested and charged with murder, though they were less inquisitive about it on social media.

Unsurprisingly, Lorraine Graves was arrested in northern Tulsa one day after her Facebook comment. She was charged with accessory to murder, and her bond was set at $500,000. I doubt the reward money would cover such a hefty bill, but ya never know. 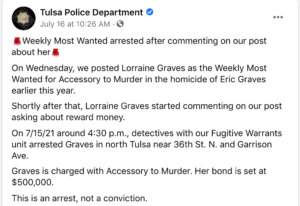 Let this be a lesson to all the kids out there. Stay off of social media while on the run from the police.