The TV industry is under attack, losing packs of viewers and subscribers by the month and by the year. Among the questions that must first be answered is the future of morning TV, which accounts for the majority of revenue brought in by the broadcast news shows.

On Tuesday, Dylan Byers revealed information from an internal sales presentation that details just how lucrative top NBC News shows are. For a hint: it’s Today and then everybody else.

An internal sales presentation prepared for NBCUniversal News Group Chairman Cesar Conde last year and seen by NBC News indicates the “TODAY” show brought in $408 million in advertising revenue in 2019, compared to “Nightly News” with $146 million and “Meet the Press” with $26 million, according to the document. ABC’s “Good Morning America” brings in $350 million to $375 million in advertising revenue per year and accounts for most of the network’s broadcast news revenue, sources at ABC said.

Though $408 million a year may sound like a lot, given trends on linear television, that $408 million could soon dip, perhaps substantially.

Morning TV is losing hundreds of thousands of viewers every year. The average number of viewers among adults 25 to 54, the demographic coveted by advertisers, is nearly half what it was a decade ago. Today and GMA are making at least $350 million each, but for how long?

A journalist can spin most stories, but this one won’t be so easy: 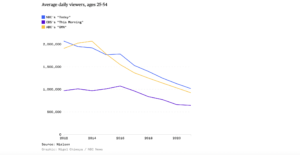 If morning TV cannot find a way to weather the storm, programs that air later in the day could first get hit.

Though viewers have hemorrhaged for years, it’s yet to truly hit the bottom lines of news networks. News networks have simply upped the charge for advertisers, a temporary fix that staunches the revenue bleed while they grow their streaming networks.

“Temporary” is the keyword. NBC reports that television executives acknowledge that major advertisers will eventually decide not to pay “higher and higher costs to reach fewer and fewer viewers.”

The hope is that news networks can replace lost linear viewers with digital views and/or subscriptions. However, that hope is just that, a hope. TV dramas and sitcoms are arguably better on-demand via Disney’s Hulu and NBC’s Peacock than morning shows would be. Today, GMA, and CBS This Morning were once routine habits for millions of Americans, even as just background. Morning shows were not made for on-demand viewing. Byers’ report also wonders whether advertising dollars would follow brands like Today and GMA, should they find success on-demand after all.

We used to wake up to morning TV, coffee, and the newspaper. In 2021, we wake up the internet, daily podcasts, and some coffee-ish drink.