According to a holiday retail survey conducted by Deloitte this year, around 11% of Americans say they don’t plan on purchasing a single Christmas gift this year, the highest number since the survey began in the 1980s.

CNBC compared this year’s share with past Christmas seasons: 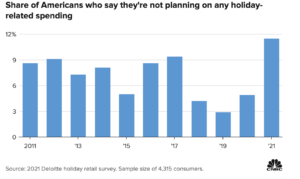 Consumers cited inflation concerns as a reason they plan to spend less on gifts. In addition, 75% of shoppers are concerned that supply chain disruptions will halt their shipping and/or that electronics, accessories, toys, and hobby products will be out of stock.

However, the National Retail Federation still predicts that holiday retail sales will rise 8.5% to 10.5% from last year, a new record gain.

How does that add up? It’s a tale of two holidays:

“This tale of two holidays is a pretty good reflection of the tale of two pandemics, right?” said Stephen Rogers, executive director of Deloitte’s consumer industry division. “What starts off as a health crisis turns into a financial crisis if you’re in the lower-income [bracket].”

So not the most encouraging survey to find. While retailers will balance inflation with higher costs for gifts that wealthy families like the Rogers’ will purchase, children born into low-income households could miss out on Christmas gifts entirely.