Bears quarterback Mitch Trubisky had a rough day in New Orleans on Sunday as he and Chicago were eliminated from the NFC postseason with a 21-9 loss to the Saints.

Trubisky was largely ineffective in the loss, throwing for just 199 yards on 19-for-29. He threw a touchdown on the game’s final play.

The former first-round pick is in for an interesting offseason. He did not have his fifth-year option picked up by the team, and he could go the free agency route to another team.

He said after the game that he would like to see himself back in Chicago in 2021, but that the two sides need to come to some sort of deal.

‘‘I think I can definitely see myself back here next year,’’ he said after he game.

The Bears had an up and down season, wrapping up 2020 with an 8-8 mark, enough to earn a Wild Card playoff spot and a trip to New Orleans before falling in a hard-fought game.

‘‘Right now, I’m just bummed about this season being over and how the game went. So [I have] a lot of emotions going on right now,” the quarterback said.

There will be plenty of teams looking for a quarterback this offseason, and the way that Trubisky played down the stretch could make him attractive to those looking to build with a young arm.

‘‘I feel like I’ve gotten better over these four years and, really, this season,’’ Trubisky said.

‘‘It’s been tough. There’s been some ups and downs. But I’m proud of where I’m at and where we battled and how we got better over the year.’’ 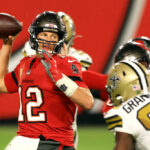 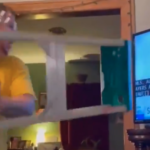