Friday night in Pittsburgh, Steelers head coach Mike Tomlin might have provided the NFL a blueprint for de-escalating the growing disconnect between its Black Lives Matter-obsessed players and traditional sports fans.

With his players standing behind him locked arm-in-arm, flanked by his team owner and general manager, Tomlin stood at midfield and publicly addressed the social unrest that briefly halted the sports world.

“This evening, as we go about our normal football business,” Tomlin began, “we come before you standing united as an organization, as a football team, as football men, from different ethnicities, socio-economic backgrounds and even countries of origin. We stand united by our talents and our love for the game of football.”

Tomlin then spoke of the difficult lessons and challenges presented in the year 2020. He said the COVID-19 pandemic and social unrest helped to contextualize the insignificance of football.

“But we also realize that we’re privileged to have a platform,” he said. “We’re committed to taking action and being a part of the solution to face social injustice and prejudice that we all face, not only in our country, but worldwide. It is our desire to be active participants in the formation of a more perfect union.

“That being said, we realize recent events are the continued reminder how far we are from that.”

Tomlin wrapped up his speech by asking his players to join him in prayer “for betterment.” Players and other members of the organization dropped to their knees, bowed their heads and prayed with their head coach.

It was a beautiful moment. Watch the entire moment on the tweet below.

I hope NFL commissioner Roger Goodell sees the video. I hope Goodell’s assistant Troy Vincent sees the video. It’s an example of the kind of leadership that should be coming out of the league office.

Was Tomlin’s speech perfect? No. It lends too much credibility to the social media-driven performative shock and outrage that occurs in the rare occurrences when a white police officer kills a black criminal suspect. It lends credibility to LeBron James’ bogus assertion that black people live in daily fear of police.

Did the black woman who called the police to remove Jacob Blake from her home fear the police? Did Jacob Blake exhibit any fear of police?

But I’m nitpicking Tomlin’s speech. It was a step in the right direction. Rather than damning and vilifying the nation that virtually no black person wants to leave and many black people desperately try to enter, Tomlin called on his players to pray that our nation improves.

That’s a message and an action that many Americans can and will support.

The athletes and their media sycophants have injected divisive partisan politics into sports. Tomlin injected God, faith and prayer into sports. I love Tomlin’s approach.

It is a clever rebuke of the BLM movement, aka, Bigots Love Marxism. BLM is a secular (anti-religion) movement. Its founders admit being trained Marxist. Marxism rejects all religions.

This modern-day “civil rights movement” promotes anger and outrage, the tools of evil.

Watch this video of a BLM leader in Portland celebrating the murder of a Trump supporter and stating that “if y’all are not angry, you’re not with me.”

BLM is the antithesis of Dr. Martin Luther King’s Civil Rights Movement, which was founded in Christian love.

Mike Tomlin’s call for prayer is the perfect rebuttal to BLM. It would be awesome if Roger Goodell or Troy Vincent could formulate a speech similar to Tomlin’s and then call for prayer before the start of NFL games.

Instead, we’re 10 days from the Chiefs and the Texans opening the season and the NFL plans to make their stadiums BLM shrines the same as the NBA Bubble.  NFL players will kneel during the national anthem and wear the names of alleged victims of police misconduct on the back of their helmets.

According to the black woman who called Kenosha police, Jacob Blake regularly sexually assaulted her and terrorized her. NFL players are going to put Blake’s name on the back of their helmets?

In 2012, I lost a cousin, Anton Butler, to what we believe was police misconduct. I loved Anton. I helped raise Anton. I look at his picture every day. He entered the world with as much promise as any human being I’ve ever known. I’m haunted by his death and some of the choices he made in his life. He was a good person.

I don’t believe his name should be honored on the back of NFL helmets. Being a victim is not an accomplishment. It’s a tragedy. Furthermore, we need to acknowledge that not all victims are innocent. Some people repeatedly place themselves in harm’s way.

I love football. I love the opportunities the game has created for black men. I’m worried that a lack of leadership from Goodell and Vincent is going to lead to the kind of self-destructive behavior we see in the NBA.

Tomlin’s leadership could point the NFL the right direction. There’s a way for NFL players to convey their social justice message without vilifying America and the traditional sports fans who are protective of national pride.

A smart speech, a short prayer and everyone standing for the national anthem could satisfy everyone. Mike Tomlin showed us the way forward. 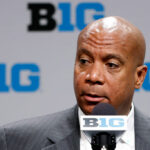 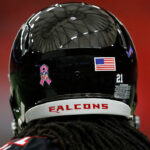